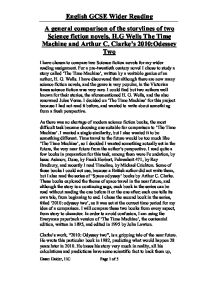 Having said this, I think that the most important character in the book is 'Heywood Floyd'. We start off the story with him, and we continue along the plot with him as our focus. Although the parts with the spirit of 'David Bowman' do not relate directly to the story until the end and have no interaction with the crew of the 'Leanov', they are still interesting to read, for example when he was coming to Earth it says 'They knew he was coming', when all the previous discussion had been near Jupiter. All the other parts have some involvement of Floyd, illustrating him as a smart, thoughtful and logical man. He describes the possibility of a 'Von Neumann' machine, and he is the one that calculates the 'trajectory home'. He seems to feel for the doctor when he loses his 'brainchild invention'. Almost every major section of the book starts with him, and a letter to home. This gives the reader more of tie in to reality, making them feel that Floyd is a real character, not completely fictitious. In 'The Time Machine' however, all but one of the characters are of little real importance. ...read more.

All in all, they were both interesting books, and in the case of 2010: Odyssey two, I continued on to read the rest of the series. I am currently on the last book of the series, 3001: the final odyssey, and I think that Clarke is a genius. His writing has kept me fascinated because of his reality merging with science fiction, and I hope that I will soon move on to another one of his great books. Although I did not like the fact that Wells' book concentrates on 'de-evolution' of man because I don't believe in it, 'The Time Machine' was definitely an interesting read. Wells' storytelling technique is absolutely brilliant, and so are his stories. There is always at least one thing in each of his books that is believable, such as the theory explaining 'Time as the 4th dimension', but everything else is pure fiction, made from scratch. In this book, the theory on the '4th dimension' being time is very plausible, and I have almost come to believe that theory. Another example of his realistic theories is in his story, 'The War of the Worlds', when the Martians are defeated by bacteria. But to the point, this was really an interesting book to read, and everyone should read this classic. English GCSE Wider Reading Hasan Haider, 11C Page 1 of 5 ...read more.