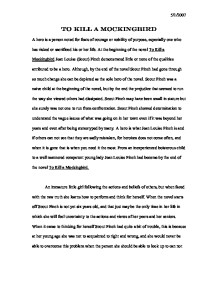 A hero is a person noted for feats of courage or nobility of purpose, especially one who has risked or sacrificed his or her l

To kill A Mockingbird A hero is a person noted for feats of courage or nobility of purpose, especially one who has risked or sacrificed his or her life. At the beginning of the novel To Kill a Mockingbird Jean Louise (Scout) Finch demonstrated little or none of the qualities attributed to be a hero. Although, by the end of the novel Scout Finch had gone through so much change she can be depicted as the sole hero of the novel. Scout Finch was a naive child at the beginning of the novel, but by the end the prejudice that seemed to run the way she viewed others had dissipated. Scout Finch may have been small in stature but she surely was not one to run from confrontation. Scout Finch showed determination to understand the vague issues of what was going on in her town even if it was beyond her years and even after being stereotyped by many. A hero is what Jean Louise Finch is and if others can not see that they are sadly mistaken, for heroism does not come often, and when it is gone that is when you need it the most. ...read more.

The Finch family faced many threats when Atticus took on this case, but none so grim. These men came to kill Tom because of a preconceived judgment and they were willing to take Atticus' life if he was to try and stop them. Because of Scout and her constant search for adventure her, Jem and Dill was just couple feet away when they saw the mob approaching Atticus. Na�ve as Scout Finch may be she could tell that Atticus might be in trouble, leaping out of the bush she ran to comfort her father, "I'll send him home, a burly man said, and grabbed Jem roughly by the collar. He yanked Jem nearly off his feet. Don't you touch him! I kicked the man swiftly. Barefooted, I was surprised to see him fall back in real pain." (pg.152). If Scout Finch had not willingly stepped in and down played the situation it could have turned out much differently. After taking this case Atticus might have thought that his family would back him up on his decision all the way, but that was not the case. Knowing he would be constantly under attack verbally and maybe physically, he told his children that whatever they heard people saying about him and the case they should just ignore and he did not want them fighting for him. ...read more.

From innocence to experience Scout grows as she takes her bumps and lumps with the controversy of racism, prejudice, bigotry and stereotyping. As a wise man once said, "A hero is a person noted for feats of courage or nobility of purpose, especially one who has risked or sacrificed his or her life." Jean-Louise Finch met and exceeded these "requirements". Scout's nobility to her family was second to none in this novel. She showed extreme loyalty to her father when he needed it the most, be it from stranger or skeptical cousins. Scout showed courage and at the same time innocence when her father faced a lynch mob and she ran in to comfort him. Heroism is not witnessed to be done by the young in society, but in a non-fiction book as To Kill a Mockingbird heroism can be seen from the smallest of characters, stature wise. Jean-Louise Scout Finch survives a quick scrape with death only because of a man which was always there to look out for her even if she thought badly of him. The ability to understand, forgive, and look at things through another person's point of view and surely the ability to be courageous is what Jean-Louise Scout Finch possesses and is what makes her a hero. ?? ?? ?? ?? 5/1/2007 ...read more.