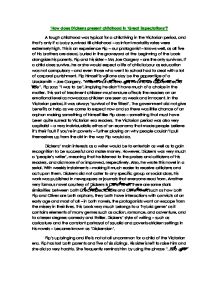 How does Dickens present childhood in Great Expectations?

'How does Dickens present childhood in 'Great Expectations'? A tough childhood was typical for a child living in the Victorian period, and that's only if a baby survived till childhood - as infant mortality rates were extremely high. This is an experience Pip - our protagonist - knows well, as all five of his brothers are dead, buried in the graveyard at the beginning of the book alongside his parents. Pip and his sister - Mrs Joe Gargery - are the only survivors. If a child does survive, he or she would expect a life of child labour as education was not compulsory - and even those who went to school had to deal with a lot of corporal punishment. Pip himself is will one day be the apprentice of a blacksmith - Joe Gargery, "When I was old enough, I was to be apprenticed to Joe". Pip says "I was to be", implying he didn't have much of a choice in the matter. This sort of treatment children must endure affects the readers on an emotional level as nowadays children are seen as weak and innocent. In the Victorian period, it was always 'survival of the fittest'. The government did not give benefits or help as we come to expect now and so there was little chance of an orphan making something of himself like Pip does - something that must have been quite surreal to Victorian era readers. ...read more.

Pip himself attests that Joe is just a larger version of a child to him, "I always treated him as a larger species of child, and as no more than my equal." Joe also cares a great deal for Pip, as shown by his actions during the very dinner party his sister scolded him in. Every time something bad was said about Pip, Joe offered Pip gravy to show that he does not feel the same way, "he always aided and comforted me when he could... and he always did so at dinner-time by giving me gravy". During this particular dinner, Joe had to give Pip a lot of gravy to comfort him to a greater extent. Magwitch, despite appearances, is the only other person to be kind to Pip. At first when he met Pip in the graveyard, he was quite threatening, "Keep still, you little devil, or I'll cut your throat!" It should also be noted that Magwitch does not enjoy being threatening or looking like the bad guy. This can be assumed by the fact he says a 'young man' - a companion of his will be the one to cut out Pip's liver instead of he himself, "in comparison with which young man I am a Angel." ...read more.

whether the flower-seeds and bulbs ever wanted of a fine day to break out of those jails, and bloom." Seeds staging a "break out" is obviously something of a child's imagination. In addition, it should be noted that caricature shouldn't be confused with characterisation as caricature exaggerates a character's bodily features to a comedic - almost cartoonish level. In contrast, characterisation is how a writer completely creates a character. Such as the characterisation of Estella would be a rude, snobby and cold-hearted person on the whole. Whereas Joe would be a kind, caring and warm-hearted individual, characterisation helps draw wide contrast between different characters. To conclude, Great Expectations is very much the 'rags-to-riches' story of the Victorian period. It is quite dark and gloomy in both storyline and setting, although it balances this sombre tone with humour through the use of devices such as caricature. Moreover, it emphasizes the difficulty of being a child in the Victorian period. However, it also portrays the world through the eyes of a child quite accurately unlike other authors who write as if a child has the same maturity and thoughts as an adult - for instance in chapter eight; in the Satis House garden, Pip says (referring to Estella) "...she seemed to be everywhere." Someone being "everywhere" would only be the imaginings of a child's viewpoint - which suits the seven year old orphan perfectly. ...read more.