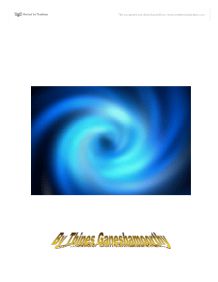 A Journey Into The Unknown

As we fell through what we felt was a bottomless hole and tunnel which was all bright and coloured in phosphorescent. We attempted to scream but no sound would escape. I thought that we had fallen into black hole, but just as that thought had become to cross my mind we crashed out of the tunnel with a loud THUMP!! We all recovered from the fall almost instantly, we stood up and began to look around and tried to take in our surroundings. We also started to consider what had happened to us. As we looked we realised that the place looked familiar but looked like nothing we had seem before at the same time but we could not say where we were and what we were doing here!! But one thing we did know was that it was not Earth, even though that there were buildings and people like on Earth there was one big major difference and that was that the sky was purple and that the sun and the moon was in the sky at the same time. My personal philosophy in life is that everything happens for a reason but in this situation I did not know what the reason was but little did I know at the time I was about to find out very shortly. At that precise moment we looked up after hearing a loud BANG! And the sun had disappeared. We had all naturally assumed that this was quite normal on this strange but familiar planet but we realised instantly that that was not the case as people had stared to scream and run about like headless chickens. ...read more.

where nothing exists and is there is no time or space in time but otherwise you have got the jest of it. " "Well are we just going to sit here talking or are we going to go and save this universe?" I asked heroically. "Let's go save the world then!!" replied Martin enthusiastically. With that we left the house and Martin guided us to an empty warehouse, and it was pitch black when we enter and then the lights came on one by one illuminating 5 people in white robes standing on high platforms and as soon as all of the members were illuminated someone spoke in a voice so loud so commanding all of us jumped a step back. . It was the eldest looking person who spoke he said "Welcome guardians to the headquarters of the elders. This is where we have been stationed for the thousand years lying in wait for you to arrive and finally you have come among us. We are most honoured and I am sure you know what to do to save our world before it dies. " "I am so sorry to you and all your people but we are only teenagers what can we do to save this world or indeed any world I am so sorry but we can do absolutely nothing to help sorry." I replied in a really apologetic way as the elders were so hoping in us for us to help. "Oh you do not understand you are the chosen ones and you are the only ones who can stop the evil overload and save not only this planet but every planet in this whole universe." ...read more.

But none of the attacks we imposed upon him worked. There were repeated attacks by the overlord which was swiftly followed by a counter attack by us. The battle was reaching no visible end we were getting tiered and he seemed not to be tiring at all and we were sure that we were going to lose, but when hope seemed all but gone Martin shouted down from below: "When the guardian's powers are combined there is nothing in this universe which can stop it." So with that advice we all came together and focused all our energies and I harnessed it all the guardians powers and gave all the energy which I had to give as the leader of the guardians and fire out a tremendous blast which knocked the overlord off his feet and made him unconscious. And in that time I held up my pedant to an empty part of the field and a time hole opened and it sucked the war lord slowly but surely back into the void were he will be imprisoned for another 50000 years. And the moment the time hole closed again the sun came back brightening up the field and bringing smile and joy to all whom set their eyes upon it. We decided to stay for a couple of days before departing but when we did eventually leave we all swore whatever happened we would protect earth and all other planet which need the help of the guardians we would be there to assist and to protect. And with that we left knowing in our heart we had accepted a very big responsibility and we had to stick by it and stick by it together. As long as we were together we would be fine. ?? ?? ?? ?? ...read more.