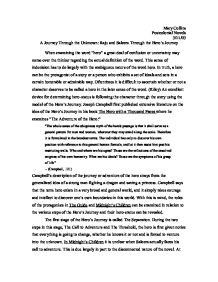 Mary Collins Postcolonial Novels 3/11/03 A Journey Through the Unknown: Raju and Saleem Through the Hero's Journey When examining the word "hero" a great deal of confusion or uncertainty may come over the thinker regarding the actual definition of the word. This sense of indecision has to do largely with the ambiguous nature of the word hero. In truth, a hero can be the protagonist of a story or a person who exhibits a set of ideals and acts in a certain honorable or admirable way. Oftentimes it is difficult to ascertain whether or not a character deserves to be called a hero in the later sense of the word. (Kiley) An excellent device for determining hero-status is following the character through the story using the model of the Hero's Journey. Joseph Campbell first published extensive literature on the idea of the Hero's Journey in his book The Hero with a Thousand Faces where he examines "The Adventure of the Hero:" "The whole sense of the ubiquitous myth of the hero's passage is that it shall serve as a general pattern for men and women, wherever they may stand along the scale. Therefore it is formulated in the broadest terms. The individual has only to discover his own position with reference to this general human formula, and let it then assist him past his restricting walls. ...read more.

This is one of the first challenges that Saleem faces. Survival is obviously an issue in the dark and dangerous unknown, but there are several other dangers as well. Temptation is a common challenge that heroes face. Saleem and his companions encounter four young maidens in a hidden temple who trick the men into believing the jungle is safe to stay in. When they realize that the maidens are only dangerous illusions, they flee the jungle and Saleem makes it to civilization safely. After several challenges, Saleem faces his greatest test when he is arrested along with all the other Midnight's Children. Locked in prison, Saleem tries to rally his companions to not lose faith and to remain optimistic that they really can change the world. Saleem also faces his adversary and fellow Midnight's Child, Shiva, who Saleem has been avoiding for his entire life. However, Saleem's will and desire to live overpower his fear of Shiva and this empowers Saleem to keep trying to "save the country" (Rushdie, 444). His release from prison and subsequent return to the magician's community marks Saleem's transformation into a father who is responsible for the life of another, not merely for himself. The birth of Aadam serves as both the catalyst for Saleem's transformation as well as his source of atonement. ...read more.

On the other hand, Narayan ends the novel on a rather ambiguous note; it is unclear whether or not Raju dies at the end. If not, then perhaps his gift is still waiting for him later in his life. Perhaps the rain that soaks the earth as a result of his faith will act as a reward for his challenges, his transformation, and his contribution to the lives of the villagers. Ultimately, it seems as though the Hero's Journey can be applied to almost any novel, which is perhaps what Campbell was aiming for. Campbell acknowledges the vastness of the world and in this broad spectrum of life, the possibility for ambiguity and multiple definitions of hero. While the term "hero" may be applied to the protagonist of a story, the deeper meaning of the word, when applied to a novel, can enrich the story's meaning. When faced with trials and tribulations, human beings are ultimately fallible. However, the ability to overcome defeat and to rise above internal and external battles is a quality that lies within each person. Everyone has the capability to be a hero, it simply depends on whether or not they are willing to change and grow through that experience. In both Midnight's Children and The Guide, the protagonists are able to overpower their demons and to face the world with a new perspective, and thus can be classified as heroes. ...read more.