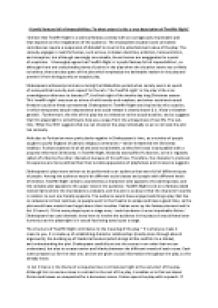 A joyful fantasy full of impossibilities. To what extent is this a true description of Twelfth Night?

﻿A joyful fantasy full of impossibilities. To what extent is this a true description of Twelfth Night? I believe that Twelfth Night is a satirical fantasy comedy with an outrageously improbable plot that depends on the imagination of the audience. The implausible situations and unrealistic coincidences require a suspension of disbelief to revel in the entertainment value of the play. The comedy engages in real life themes, such as love, mistaken identities, ambition, homoeroticism, and deception, but although seemingly conceivable, these themes are exaggerated to a point of scepticism. I thoroughly agree that Twelfth Night is ?a joyful fantasy full of impossibilities?, as although there are undoubtedly plenty of points in the play when the situation seems too unlikely to believe, there are also parts of the plot which emphasize the believable realism in the play and prevent it from being purely an escapist play. Shakespeare achieved prominence during the Elizabethan period when society was in an epoch of socio-political security and respect for the arts. The ?twelfth night? in the play?s title is an unambiguous reference to January 6th, the final night of the twelve day long Christmas season. This ?twelfth night? was seen as a time of wild revelry and mayhem, and when social and sexual freedom could be freely contravened. Shakespeare?s Twelfth Night was inspired by this occasion, in which temporary sexual independence and social release is clearly shown (i.e.: Viola?s mistaken gender). Furthermore, the title of this play has no relevance to the actual storyline, and so suggests that this playwright is something to help you escape from the unhappiness of real life. The sub-title, ?What You Will? suggests that we can interpret the play individually so as to not take the plot too seriously. Attitudes to Puritanism were particularly negative in Shakespeare?s time, as a number of people sought to purify England of catholic religious ceremonies ? which threatened the Christmas tradition. ...read more.

However, Olivia contradicts herself when she ?falls in love? with Cesario, ?even so quickly may one catch the plague?? This conjures up the image of Olivia catching the disease of love. This is ironic because at the start of the play, Orsino said that she ?purges the air of pestilence?, referring to Olivia as cleansing the air of disease. However, when Olivia says this, she?s saying she ?caught? the disease of love. This would have shocked the audience greatly as Olivia told everyone she would see no man for seven years, and suddenly, a young man she likes the look of turns up and she is in ?love?. This is unrealistic, as it is very unlikely that Viola would be able to dress as a man, yet still talk like a woman, especially as Olivia still finds her attractive and so falls in love with her. Furthermore, it is implausible that Olivia could change her mind so quickly ? she fell in love right away which doesn?t happen in real life. I don?t think that this scene is supposed to sound joyful and funny because of Shakespeare?s use of verse, which makes it more serious especially as the theme of love is being portrayed again. A major theme is shown at this point in the play ? how Olivia and Orsino are both changed by their relationships with Viola. Before meeting Viola, Orsino spoke poetically but also expressed his artificial love for Olivia, however, after he meets Viola he gets straight to the point, sharing with Cesario the extent of his love for Olivia and his plans to woo her. In Olivia?s first encounter with Viola, her shows of mourning are suddenly forgotten, and Olivia must use her wit to deal with Viola. In Act 2, Scene 2, Viola notices what the audience have perceived the whole time ? the irony of the situation she?s in. ...read more.

to comprehend ? he was tricked, accused of being mad, then locked up, and still he doesn?t learn that how he treats people is wrong. Feste's statement about how his enemies "tell me plainly I am an ass, so that by my foes, sir, I profit in the knowledge of myself," could be because he is trying to get Malvolio to realize his mistakes. Yet again, this is more use of moral content because Feste, the jester, is trying to get Malvolio to accept what he did ? although jesters are meant to be fools.The relationship between Sir Toby and Sir Andrew is also unresolved at the end of the play; their last appearance has Sir Toby swearing at Sir Andrew, and apparently quitting Sir Andrew's company. All of this going on around them gives Sebastian and Viola time to work through their undoubtedly passionate feelings about each other and actually understand what happened to them. Sebastian renews his pledge to Olivia and they remain married, and Viola and Orsino end up marrying. This is total fantasy because before this Orsino thought Cesario was a man, and now he knows who Cesario really is he suddenly loves her ? which is far-fetched. However, although Orsino closes the play on a happy note with an optimistic statement about the ?golden time? the newlyweds are about to enjoy, Feste sings a song that ruins the possibility of a completely happy and perfect ending, reminding us that the play has ended and now you have to go back to reality. It talks of the sad life of actors, jesters, and humans in general, but he declares that he and his fellows will continue trying to make the audience laugh. In conclusion, I thoroughly agree that Twelfth Night is ?A joyful fantasy full of impossibilities?, because I believe that the play is mostly fantasy with many unfeasible events, however, themes such as unrequited love, cruelty, grief, and friendship are all portrayed, which restricts it from being total fantasy. ...read more.