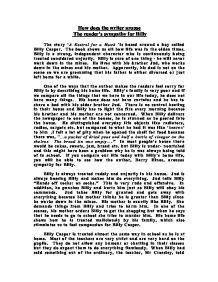 A Kestral for a Hawk - How does the writer arouse the reader's sympathy for Billy.

How does the writer arouse The reader's sympathy for Billy The story 'A Kestrel for a Hawk 'is based around a boy called Billy Casper. The book shows us all how life was in the olden times. Billy is a strong, independent character who is continuously being treated considered unjustly. Billy is sure of one thing - he will never work down in the mines. He lives with his brother Jud, who works down in the mines and his mother. Apparently, his dad is not on the scene so we are presuming that his father is either divorced or just left home for a while. One of the ways that the author makes the readers feel sorry for Billy is by describing his home life. Billy's family is very poor and if we compare all the things that we have in our life today, he does not have many things. His home does not have curtains and he has to share a bed with his older brother Jud. ...read more.

Jud is always bossing Billy and makes him do everything. Jud tells Billy "Hands off cocks: on socks." This is very rude and offensive. In addition, he punches Billy and hurts him just so Billy will obey his commands. Jud takes Billy for granted and gets away with everything because his mother thinks he is greater than Billy since he works down in the mines. His mother is exactly like Billy. She demands things from Billy and tries to harm him. In one of the scenes, his mother orders Billy to get the shopping but when he says that he needs to go to school she tries to murder him. His home life shows how he is treated maliciously by his family, which also stimulates us to feel compassion for Billy Casper. Billy Casper is treated almost the same way in school as he is at home. Most of the teachers are very strict and are very hard on the pupils. ...read more.

The headmaster, Gryce, told the teacher that it was somebody from a particular section and the teacher just came and pulled out Billy Casper. Later on, we find that it was not Billy but they did not seem to care. One reason that most teachers do not seem to care of what happens to the students, is maybe because they knew that the children were probably were going to go down and work down in the mines, where the would eventually die of lung cancer or other diseases. Finally, the last reason of how the author makes the reader feel pity for Billy is the comparisons he makes in the narrations. There are a lot of similes and metaphors that describe Billy's emotions and feelings. One of the similes used was, "He stood still as a rock as the cane came swishing down faster then one could blink. ...looked down at his hand and an ugly mark shone out like gold ...." I felt a lot of sympathy for Billy when the author makes these comparisons and I really liked the way that the author did not over-do the comparisons and made them seem really realistic. ...read more.