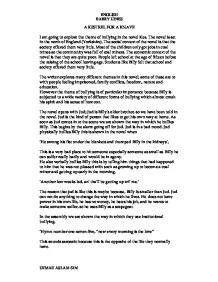 A KESTREL FOR A KNAVE

A KESTREL FOR A KNAVE I am going to explore the theme of bullying in the novel Kes. The novel is set in the north of England (Yorkshire). The social context of the novel is that the society offered them very little. Most of the children only got jobs in coal mines so the community was full of coal miners. The economic context of the novel is that they are quite poor. People left school at the age of fifteen before the raising of the school leaving age. Students like Billy felt that school and society offered them very little. The writer explores many different themes in this novel; some of these are to with people feeling imprisoned, family conflicts, freedom, nature and education. However the theme of bullying is of particular importance because Billy is subjected to a wide variety of different forms of bullying which almost crush his spirit and his sense of humour. The novel opens with Jud; Jud is Billy's older brother, so we have been told in the novel. Jud is the kind of person that likes to get his own way at home. ...read more.

'Don't argue lad, I saw you.' When Billy arrives at school he is immediately bullied by his teacher because he falls asleep in assembly. The head teacher humiliates the children he shouts at the pupils for little unnecessary things. The pupils are the victims. 'I'll make you sing like you've never sung before.' The head is bossy and threatens them. But although this is the case the Head still seems powerless. It is shown by his role. The smallest boy is bullied by smokers; they force him to take the cigarettes. When he tries to tell the head about the message he was told to pass on the head does not listen to him, and instead punishes him along with the others. 'I'm sick of you boys, you'll be the death of me.' ' so for want of a better solution I continue using the cane, knowing full well that you'll be back time and time again for some more.' 'Please, sir...' 'Quiet, lad! And get your pockets emptied!' The head finally discovers that the smallest boy has the cigarettes so he smacks all of them on their hands with the cane Head uses cane to conflict pain/humiliation. ...read more.

The worst bullying Billy experiences is when Jud kills Kes, Billy's only friend, just because Billy did not place a bet for Jud. I think that Billy goes to the cinema as a source of comfort. This is the last memory he has being happy with his farther. All of a sudden an abrupt change of mood, his mum is having an affair and then his dad leaves. Then the memory is over. Billy wants to escape in to a better life. Where Kes is alive, Billy is powerful and Jud can't do any thing to Billy or Kes. But there is no escape. Billy returns to the same situation. The writer creates sympathy for Billy by showing that he can survive no matter what life throws at him. He shows that Billy is resilient, that he does not get defeated by anything. My own personal response to the novel is that, Bullying is in the whole society. And that there is not many choices given to anyone in the society to become anything of themselves. I have not actually experienced this myself but it did make me think about people and life. It is a harsh society. ?? ?? ?? ?? ENGLISH BARRY HINES UZMAH ASLAM 61M ...read more.