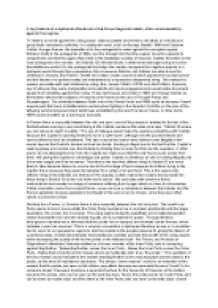 A key feature of a dystopian literature, such as &quot;1984&quot; and &quot;Hunger Games&quot; is that the protagonist rebels, often unsuccessfully against the regime.

﻿A key feature of a dystopian literature is that the protagonist rebels, often unsuccessfully against the regime. To rebel is to revolt against the ruling power, reject accepted conventions and takes an individual or group that?s resistant to authority. In a dystopian novel, such as George Orwell?s 1984 and Suzanne Collins? Hunger Games, the typicality is for the protagonist to rebel against the corrupted regime. Winston Smith is the protagonist of 1984, and it is through him that the readers have the capacity to comprehend and feel the agony that exists in the totalitarian society of Oceania. Katniss Everdeen is the main protagonist, the narrator, and District 12's female tribute, a determined teenager trying to survive the totalitarian control. It?s the protagonist that helps the readers recognise the negative aspects in a dystopian world through their perspective, this is because Winston and Katniss are able to see the unethical in Oceania and Panem. Orwell and Collins create a world in which oppressive societal control and the illusion of a perfect society are maintained by a repressive dictatorship ruling. This makes the readers associate with past dictatorship ruling, like; Joseph Stalin?s USSR and Adolf Hitler?s Germany era of ruling as they were manipulative and sadistic and used propaganda and secret police to prevent people from rebelling against their ruling. These techniques are similar in 1984 and Hunger Games as the leaders dehumanise citizens of Oceania and Panem by the use of Thought Police and Peacekeepers. ...read more.

For history being rewritten by the Party shows the repressive control on the past and future because we depend on knowing the mistakes of the past in order to correct them in the future, "Who controls the past controls the future. Who controls the present controls the past." Orwell demonstrates that people can be controlled through cultural conditioning, this is because people will put their faith in a government that they believe tells them the truth. Winston?s profession leads him to rebel against the Party by writing about the present in his diary to inform the people of the future what actually occurred in the past. Winston wrote in his diary entry, ?If there is hope...it lies in the proles.? This rebellious thought written in Winston diary shows that the proles are the only ones that can actually rebel against the Party because the proles aren?t put in rigorous monitoring that members of the Party, like Winston, are. This is because the Party sees the proles as not intelligent since they seem pleased with their life because they are satisfied to have food, shelter and entertainment. This links back to what I stated about the proles being the largest population in Oceania and are being manipulated by the Party, this is the reason why they didn?t overthrow the Party because they have an elevated image for the Party without realising that they are living in poverty. ...read more.

Winston was unsuccessful in rebelling against Big Brother which had caused him to become ignorant and loyal because he is able to doublethink, something he was not able to do before. He is able to believe that ?2+2=5? and the Party?s slogan, ?WAR IS PEACE, FREEDOM IS SLAVERY, and IGNORANCE IS STRENGTH? which are all obvious lies. Orwell uses an oxymoron to show us that Winston no longer exists as a thinking individual, he exists only as a puppet of Big Brother. Winston?s unsuccessful rebellion could be an indication that Orwell is informing us that humans will lose their individuality if under enough fear and will not retain traditional values if they believe themselves to be in danger. Katniss, unlike Winston, stays strong and doesn?t lose herself to an oppressive regime. Katniss rebellion doesn?t end in her outsmarting the Capitol and Gamemakers when her and Peeta win the 74th Hunger Games, ?and right now, the most dangerous part of the Hunger Games is about to begin.? The dialogue spoken by Katniss shows us that her rebellion isn?t over and would be continued by Collins. Orwell and Collins warn us of giving too much power to a government. If there is no rebellion, the totalitarian dictatorship only gets stronger with the passage of time. We learnt in history that giving dictators too much power has caused human to lose value. Adolf Hitler Reference: https://fitzharding.wordpress.com/2013/02/27/-contextof-1984-george-orwell/ http://blogs.britannica.com/2012/03/bread-circuses-the-hunger-games-ancient-rome/ ...read more.