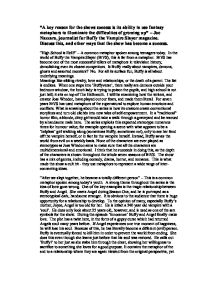 &quot;A key reason for the shows success is its ability to use fantasy metaphors to illuminate the difficulties of growing up&quot; - Joe Nazzaro, journalist for Buffy the Vampire Slayer magazine.Discuss this, and other ways that the show has become a success.

"A key reason for the shows success is its ability to use fantasy metaphors to illuminate the difficulties of growing up" - Joe Nazzaro, journalist for Buffy the Vampire Slayer magazine. Discuss this, and other ways that the show has become a success. "High School is Hell!" - A common metaphor spoken among teenagers today. In the world of Buffy the Vampire Slayer (BtVS), this is far from a metaphor. BtVS has become one of the most successful tellers of metaphors in television history, demolishing even its closest competitors. Is Buffy really about vampires, demons, ghosts and assorted monsters? No. For all its surface fun, Buffy is all about underlying meanings. Meanings like sibling rivalry, love and relationships, or the death of a parent. The list is endless. When one steps into 'Buffyverse', there really are demons outside your bedroom window, the lunch lady is trying to poison the pupils, and high school is not just hell; it sits on top of The Hellmouth. I will be examining how the writers, and creator Joss Whedon, have played out our fears, and made them literal. For seven years BtVS has used metaphors of the supernatural to explore human emotions and conflicts. What is amazing about the series is how its creators create conventional storylines and turn old clich�s into new tales of self-empowerment. In a "traditional" horror film, a blonde, ditsy girl would take a walk through a graveyard and be rescued by a handsome male hero. The series exploits this expected stereotype numerous times for humour value; for example opening a scene with what appears to be a 'helpless' girl walking along (sometimes Buffy, sometimes not), only to see her fend off the vampire herself, or in fact be the vampire herself. Instead, Buffy saves the world from evil on a weekly basis. None of the characters are ever played as stereotypes as Joss Whedon aims to make sure that all the characters are multidimensional and emotional. ...read more.

They reunite again, before their happiness is destroyed when a stray bullet intended for the Slayer kills Tara. The shot goes through the back of Tara, splattering Willows shirt with her blood. The last scene of the episode is Willow in tears, cradling the lifeless body of Tara. Overcome by her grief and rage, Willow infuses herself with every bit of black magic she can find. Over the three last episodes of the Season, Willows rage grows, and grows. She begins by trying to find the 'Geek Trio' in order to murder them for Tara's death. Buffy and Xander naturally try to stop her, and the more they do this, the greater her rage becomes. She eventually hunts down Warren and tortures him to death. Much to everyone's joy, Giles returns from England. He has come with what he thinks will be enough power to stop Willow. And he is right. She takes the power from him and can now feel the emotion of everyone on earth. She can feel everyone's pain and emotion; it is too much for her to take, so she decides to destroy the world to stop the pain. We learn that the one thing more powerful than all that hate, is what Xander uses as his weapon - just three little words - I love you. Xander saves the world with his boring old love for Willow. For six years, it hasn't been about magic or supernatural forces. It's been about joy and sorrow, love and hate, and fear and lust. Irony is used fairly often in BtVS, sometimes for a use of comedy, and sometimes as a way of provoking more emotional reactions in the audience to make them think about the episode afterwards. 'The Wish' is an episode which uses irony extremely well. Cordelia makes a wish to Anya (who she doesn't realise is a 'vengeance demon') ...read more.

He later attempts to cold-heartedly murder Buffy, killing Tara in the process. This is where Willow skins him alive in her rage. At this point, Buffy is trying to protect Jonathon and Andrew from Willows wrath and they are portrayed as even more weak and fragile as they were before. This is interesting to see, as the audience knows they are both quite innocent in the situation. They have always been considered weak and immature, whereas Warren was always the man of the group. This is disproved in the situation where it is blatant that Warren is unable to accept responsibility or admit defeat, and that he is the immature one of them all. I think that this is meant to be noticed by the audience, and teaches a valuable lesson. Buffy has always come across as a simple series about a group of friends who fight Vampires, but as I have investigated deeper into it, I have found it to be about much more. Aswell as including a lot of hidden metaphors, irony, and foreshadowing, it is all about psychology and philosophy. It could be said that Buffy had to become more like a soap opera in order to become what people wanted, however I think that it became a truly unique TV show, in the original and imaginative story-lines and the depth of character. It became such a success and inspiration that there was a spin-off, Angel, which managed to gain a status of being a 'stand alone' series. A shows success should not just be based on who watches it when it is on TV, but how long it lives for once it has finished. BtVS's finale season finished a year ago, and is still a widely acclaimed show, with a huge fan base. "Buffy is made by writers who think very hard about what they are doing in terms of psychology. When somebody says there is a philosophy behind "Buffy" that is the truth. When they say there is symbolism and meaning that's true too. ...read more.