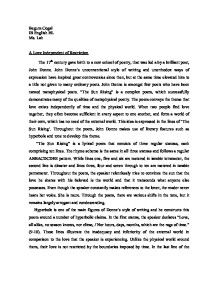 A Love Independent of Restriction

Begum Cogal IB English HL Ms. Lah A Love Independent of Restriction The 17th century gave birth to a new school of poetry, that was led a by a brilliant poet, John Donne. John Donne's unconventional style of writing and unorthodox ways of expression have inspired great controversies since then, but at the same time elevated him to a title not given to many ordinary poets. John Donne is amongst few poets who have been named metaphysical poets. "The Sun Rising" is a complex poem, which successfully demonstrates many of the qualities of metaphysical poetry. The poem conveys the theme that love exists independently of time and the physical world. When two people find love together, they often become sufficient in every aspect to one another, and form a world of their own, which has no need of the external world. This idea is expressed in the lines of 'The Sun Rising'. Throughout the poem, John Donne makes use of literary features such as hyperbole and tone to develop this theme. "The Sun Rising" is a lyrical poem that consists of three regular stanzas, each comprising ten lines. The rhyme scheme is the same in all three stanzas and follows a regular ABBACDCDEE pattern. ...read more.

However, the speaker expresses that he does not wish to do this, as he would also be blocking out the sight of his beloved. "I could eclipse and cloud them with a wink, / But that I would not lose her sight so long; " (13-14). The speaker demonstrates that the way he thinks and feels is superior to external factors and that he is powerful. Donne continues to employ hyperbole in the following lines to demonstrate the magnitude of their love. The speaker tells the sun to check over the "Indias of spice and mine" (17) and "those Kings" (19) and claims that he would not find them where he had left them but with him in his bed with his lover. By saying that the riches and wealth of India are in bed with him he is speaking of his lover. The speaker claims that all the riches in the world are embodied in his lover. Lines 17 through 20 also illustrate how the speaker feels that their love transcends the confinement of space and the need for material wealth and power. Finally, in the third stanza the speaker declares that he and his lover are the world. He compares his lover to "all states" (21) ...read more.

While the speaker's tone is condescending towards the sun and mocking when he is talking about the social factors and physical matter, his tone is admiring and full of pride when he speaks of his lover. This is conveyed when he says, " But that I would not lose her sight so long;" (14). This shows that he cannot get enough of his lover and does not want to be separated from her sight for even a moment. This as mentioned previously is said in an exaggerated tone in order to emphasize how much he loves her. The tone does a lot to convey, the sincerity of the speaker and his attitude towards the concept of love. Throughout the poem the speaker relentlessly emphasizes that their love is so superior that it transcends time, all need for the external world, social relations and wealth; however, at the same time, he is constantly reminding himself of these confinements and restrictions. For example Donne's sly sympathy for the aging sun hints at the reality of human aging and this undermines the speaker's optimism and confidence as it brings into the picture the effect of time and how love is not really limitless. The speaker contradicts himself. Also, paradoxically, even though the speaker claims to have love that exists independent of all restriction, he willing confines himself to his lover and their little world. ...read more.