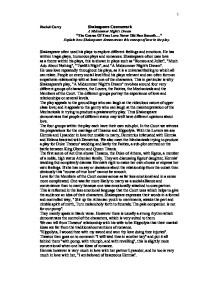 Rachel Curry Shakespeare Coursework A Midsummer Night's Dream "The Course Of True Love Never Did Run Smooth..." Explain how Shakespeare demonstrates this concept of love in the play. Shakespeare often used his plays to explore different feelings and emotions. He has written tragic plays, humorous plays and romances. Shakespeare often uses love as a theme within his plays, this is shown in plays such as "Romeo and Juliet", "Much Ado About Nothing", "Twelfth Night", and "A Midsummer Night's Dream". He uses love repeatedly throughout his plays, as it is a universal feeling to which all can relate. People on every social level find his plays relevant and can often form an empathetic relationship with at least one of the characters. This in particular is why Shakespeare's play, "A Midsummer Night's Dream" revolves around four very different groups of characters, the Lovers, the Fairies, the Mechanicals and the Members of the Court. The different groups portray the experience of love and relationships on several levels. The play appeals to the groundlings who can laugh at the ridiculous nature of upper class love; and it appeals to the gentry who can laugh at the misinterpretation of the Mechanicals in trying to produce a praiseworthy play. Thus Shakespeare demonstrates that people of different status may well have different opinions about love. The four groups within the play each have their own sub-plot. In the Court we witness the preparations for the marriage of Theseus and Hippolyta. With the Lovers we see Hermia and Lysander in love but unable to marry, Demetrius infatuated with Hermia and Helena besotted with Demetrius. We also meet the Mechanicals trying to produce a play for Duke Theseus' wedding and lastly the Fairies, a sub-plot centred on the battle between King Oberon and Queen Titania. The first scene of Act One shows Theseus, the Duke of Athens, with Egeus, a member of a noble, high status Athenian family. ...read more.

This is shown perfectly when the Mechanicals try to produce the play for the Duke's wedding. There is a comical aspect to both their incompetence and also the fact that the audience of the play laugh at the Mechanicals inability to perform the emotion of love, yet at the same time their own ideas of love are very clouded and confused. This creates an irony when viewing "A Midsummer Night's Dream" as we see that even though the Duke, Theseus and his wife to be, Hippolyta find the plot of the Mechanicals play amusing. They do not realise that Pyramus and Thisbe's situation rather mirrors their own relationship and many other relationships in the play such as Hermia and Lysander's. For Pyramus and Thisbe, the lovers in the play, love is impossible due to the opposition of their parents. Their decision to elope is a reflection of the decision of Lysander and Hermia; but even then, as for Lysander and Hermia, "the course of true love never did run smooth". Here their story becomes a parody of Shakespeare's tragedy "Romeo and Juliet", because each commits suicide under the impression that their lover is dead. The dreadful mistakes made by the Mechanicals turn it from tragedy to farce, but still "the course of true love never did run smooth" for Pyramus or Thisbe. The humour in the Mechanical's play is presented in many different ways. One element that provides humour is the Mechanicals blatantly inept performance and the many ways in which they misinterpret much of the play, "For Pyramus therein doth kill himself, which when I saw rehearsed I must confess, made mine eyes water; but more "merry" tears". When Quince attempts to give his prologue he is purely laughed at as "he hath played on this prologue like a child on a recorder-sound but not in government". The Mechanicals somehow manage to display humour in a supposed "Tragedy" as firstly the wall talks, "Thus have I, Wall, my part discharged so", and also Pyramus dying scene is so overacted and exaggerated it brings tears of laughter to the spectators. ...read more.

The audience feels satisfied and takes the play as light-hearted fun. However when a play has a tragic ending then it does not always feel complete. It feels as if there is something missing. Others however may feel that sometimes a perfect ending is unrealistic. I think that if Shakespeare had left some happiness in the play yet it was not perfect then it would have been more realistic as love is not always resolved easily and is not always perfect. The play is still relevant to the modern day audience. We can recognise the emotions involved, as not only is love universal, but it has changed little over time. There is still a sense that love then was not quite as it is now in some of the subplots, such as in the court scenes. Love was far more for convenience and status than it is now. The situation of the lovers however mirrors better how we look at love today; sometimes a struggle; sometimes a hard path; sometimes unrequited; rarely perfect; but always true. Shakespeare demonstrates this extremely well, which is why modern day audiences still find his plays stimulating and applicable to their life styles. Shakespeare demonstrates the quote "the course of true love never did run smooth" very well in the play "A Midsummer Night's Dream". However, rather ironically in this particular play, all ends well. It is to this day almost seen as an error to leave a play with problems so Puck is right to say "Now to 'scape the serpent's tongue we will make amends ere long...Give me your hands, if we be friends, and Robin shall restore amends". There is comfort in the knowledge that all damage has been restored. However, the complexity and calamity in Shakespeare's play is part of what demonstrates the confusion of love; there is no one way of achieving a smooth path but instead it is an exploration in which there is no final or correct answer. 3508 words 1 1 ...read more.