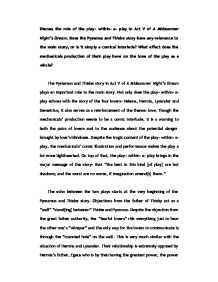 A Midsummer Night's Dream- Play within a play

Discuss the role of the play- within- a- play in Act V of A Midsummer Night's Dream. Does the Pyramus and Thisbe story have any relevance to the main story, or is it simply a comical interlude? What effect does the mechanicals production of their play have on the tone of the play as a whole? The Pymamus and Thisbe story in Act V of A Midsummer Night's Dream plays an important role to the main story. Not only does the play- within- a- play echoes with the story of the four lovers- Helena, Hermia, Lysander and Demetrius, it also serves as a reinforcement of the theme: love. Though the mechanicals' production seems to be a comic interlude, it is a warning to both the pairs of lovers and to the audience about the potential danger brought by love's blindness. Despite the tragic content of the play- within- a- play, the mechanicals' comic illustration and performance makes the play a lot more lighthearted. On top of that, the play- within- a- play brings in the major message of the story- that "the best in this kind [of play] are but shadows; and the worst are no worse, if imagination amend[s] them." ...read more.

Splendid does the idea sound, but obviously elopement would not be the best solution. It is way too risky and dangerous and the main reason of them making such decision is that love makes a person impatient and selfish. As John Donne said in The Good Morrow, the lovers "possess one world, each hath one and is one", they are living in a world with no outsiders. The objections and obstacles "stand as an edict in destiny", a kind of "a customary cross" which teaches them "trial patience". Therefore, like a fence in front, what they only need to do is to jump over it. However, did they think about walking around it or any other methods? Echoing the main story, Thisbe as well though fully aware of the consequences, decides to make a rash decision and to meet Pyramus in a secret place, the Ninus' tomb. "Reason and love keep little company nowadays", in fact, both plays possess the same message. Towards the climax of both plays, the lovers no longer hold senses and unreason begins to appear. ...read more.

The play itself loses it seriousness and heaviness, and is then becoming a lot more like a comical interlude. As the actors lack knowledge towards acting and the play, it adds comic effect to the play. Overusing poetic techniques such as alliteration and weird acting made by the wall, lion and moonlight make the performance "the silliest stuff" ever heard. This in fact quite matches with the Duke's intention that "the pale companion is not for [his] pomp" and that "melancholy [should] forth to funerals". Instead of putting attention on the content of the play, much emphasis is on the simplicity of the workers. In fact, readers are reminded not to take the play seriously as they are just "dreams" which comes and goes quickly. As mentioned by Theseus "the best in this kind [of play] are but shadows; and the worst are no worse, if imagination amend[s] them." Therefore, we should take the play lightheartedly as they are no more than visions. All in all, the "tedious brief scene" parallels with the main story as both plays deal with the obstacles of love and the unreason of love. Though the play- within- a- play ends tragically, it turns out to have a hilarious ending and matches with the play's ending as well. ...read more.