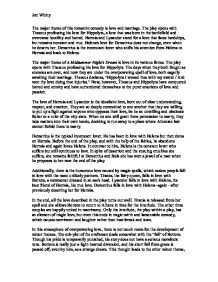 A midsummer Night's dream - The major theme of this romantic comedy is love and marriage. The play opens with Theseus professing his love for Hippolyta, a love that was born in the battlefield

The major theme of this romantic comedy is love and marriage. The play opens with Theseus professing his love for Hippolyta, a love that was born in the battlefield and overcame hostility and hatred. Hermia and Lysander stand for a love that faces hardships, but remains constant and true. Helena's love for Demetrius does not change, even when he deserts her. Demetrius is the inconstant lover who shifts his attention from Helena to Hermia and back to Helena. The major theme of A Midsummer Night's Dream is love in its various forms. The play opens with Theseus professing his love for Hippolyta. The days when they both fought as enemies are over, and now they are under the overpowering spell of love, both eagerly awaiting their marriage. ...read more.

When no one will grant them permission to marry, they take matters into their own hands, deciding to run away to a place where Athenian law cannot forbid them to marry. Demetrius is the typical inconstant lover. He has been in love with Helena but then dotes on Hermia. Before the end of the play, and with the help of the fairies, he abandons Hermia and again loves Helena. In contrast to him, Helena is the constant lover who suffers but still continues to love. In spite of desertion and the ensuing cruelties she suffers, she remains faithful to Demetrius and feels she has won a jewel of a man when he proposes to her near the end of the play. ...read more.

The other three couples are happily united in matrimony. Only the interlude, the play within a play, has an element of tragic love, but even this ends in tragic mirth and lamentable comedy, which causes merriment and laughter rather than heartbreak and tears. In this atmosphere of overpowering love, there is not much room for the development of minor themes. The sub-plot of the craftsmen deals somewhat with the "fall" of Bottom. Though his pride is temporarily punished, his story does not have a serious moralistic tone. Bottom is really just a light-hearted diversion, and his short fall from grace is passed off, even by him, as a strange dream. This thought leads to the other minor theme, that life is sometimes like a dream and dreams are sometimes very life-like. Throughout the play, entitled as a dream, the characters wander in and out of both real and fantasy worlds. Jon Whitty ...read more.