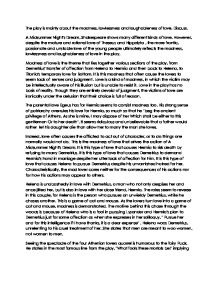 A Midsummer Night's Dream. The play is mainly about the madness, lawlessness and laughableness of love. Discuss.

The play is mainly about the madness, lawlessness and laughableness of love. Discuss. A Midsummer Night's Dream, Shakespeare shows many different kinds of love. However, despite the mature and rational love of Theseus and Hippolyta , the more frantic, passionate and unstable love of the young people ultimately reflects the madness, lawlessness and laughableness of love in the play. Madness of love is the theme that ties together various sections of the play, from Demetrius' transfer of affection from Helena to Hermia and then back to Helena, to Titania's temporary love for Bottom. It is this madness that often cause the lovers to seem lack of senses and judgment. Love is a kind of madness, in which the victim may be intellectually aware of his illusion but is unable to resist it. Love in the play has no basis of reality. Though they are entirely devoid of judgment, the victims of love are ironically under the delusion that their choice is full of reason. The parental love Egeus has for Hermia seems to consist madness too. His strong sense of patriarchy overrules his love for Hermia, so much so that he 'beg the ancient privilege of Athens. ...read more.

He states in the most famous line from the play, "What fools these mortals be!" implying that their foolishness and madness arises because of love. Love makes the mortals act foolishly and madly and Puck notices it. This memorable scene of the love quadrangle all entangled is hysterical and laughable. Each man keeps changing the woman he loves, and each woman cannot believe the reality of the love proclaimed. Demetrius dotes on Helena, the woman he scorns, and Lysander abandons his true love Hermia, to dote on Helena as well. The two even become foolish fighters and prepare to duel for love. Furthermore, Helena and Hermia became rivals in love as well, all because of love. Only in the relationship between Thesus and Hippolyta, reason and love are combined in an orderly and sane manner. A further point is that Shakespeare floods the play with moonlight as if to suggest that the mad lovers are controlled by the moonlight. Again, only Theseus and Hippolyta break this pattern. There is only one daylight scene in the entire play where Theseus's hunting party arrive at the coming of dawn. Here, the coming of the day and the sounding of the hunting horns announce the return of sanity, the dispersal of magic and illusion, the end of the dream. ...read more.

Also, The image of Titania waking up to fall in love with the donkey-faced Bottom is pure mockery of the ideal of love. A beautiful fairy doting on and seducing not only a common man, but an ass is foolish, funny, and fearful. This play seems to take the mockery of love to extreme illustrations, resulting in the comedy of love. Helena cannot believe that these men love her. She believes that their love to her is a cruel joke, foolish treatment. She is upset with Lysander for doting over her, for she simply does not nor cannot believe it to be true. Furthermore, the love that Lysander at one point has for Hermia, suddenly transforms into adoration for Helena instantaneously from the magic juice. A simple drop of juice can change love quickly and foolishly. This shows the laughableness of love as love is portrayed to be very weak and fickled. In conclusion, Shakespeare had an abundance of ideas about love, each idea twisted to suite his views of the connections with life and people. One of his main focuses is love, the different types of love, and the way in which love is expressed and in "A Midsummer Night's Dream", love is full of madness, lawlessness and laughableness. ...read more.