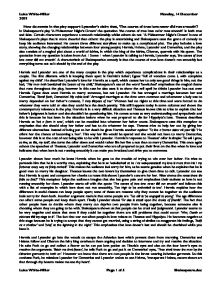 In Shakespeare's play 'A Midsummer Night's Dream' the quotation 'the course of true love ne'er runs smooth' is both true and false. Certain characters experience a smooth relationship whilst others do not. 'A Midsummer Night's Dream' is one of Shakespeare's plays that is more cheerful than others: the play is entertaining and Shakespeare uses the genre of comedy to keep his audience interested. He covers three different storylines to make up a complicated plot. The play includes a love story, showing the changing relationships between four young people; Hermia, Helena, Lysander and Demetrius, and the play also consists of a magical plot about a world of fairies, in which the king of the fairies, Oberon, quarrels with his queen. The quotation from my question is taken from Act 1 Scene 1 when Lysander is talking to Hermia, Lysander says, 'the course of true love never did run smooth'. A characteristic of Shakespearian comedy is that the course of true love doesn't run smoothly but everything turns out as it should by the end of the play. Hermia and Lysander are one of the many couples in the play which experience complications in their relationships as a couple. The first dilemma which is keeping them apart is Hermia's father; Egeus 'Full of vexation come I, with complaint against my child'. He describes Lysander's love for Hermia as a spell, which causes her to only see good things in him, not the bad, 'This man hath bewitched the bosom of my child,' Shakespeare's use of the word 'bewitched' emphasizes the magical theme that runs throughout the play, however in this case he also uses it to show the evil spell he thinks Lysander has cast over Hermia. Egeus does want Hermia to marry someone, but not Lysander. He has arranged a marriage between her and Demetrius, 'Stand forth, Demetrius! My noble lord.' Arranged marriages at the time were common and whomever a lady was to marry depended on her father's consent, 'I may dispose of her.' ...read more.

Titania states that they are the 'parents' of the problem and they are the only ones who can sort it out. Oberon hints to the audience that he will get revenge on Titania in some way. 'Well, go thy way. Thou shalt not from this grove / Till I torment thee for this injury.' This shows his anger because Titania will not give him the boy. He acts very childishly and comes across as someone who cannot have his pride destroyed. Titania has disobeyed him; therefore Oberon has to get his own back. When Oberon is talking to Puck he speaks in rhyming couplets. This emphasises the scene they are in but also the fact that they are talking about potions so there is a magical atmosphere. He is discussing the potion that will help restore harmony in the relationship of Demetrius and Helena; however Shakespeare implies that love should not be interfered with. This is ironic because on one hand he is using the potion for a good reason, but on the other he is using it to punish Titania and not compromise, which would be more mature. Here I think the audience feel Oberon should concentrate on his own problem he has with his wife before he deals with other relationships. When the potion is put on people's eyes as they are sleeping, the first thing they see on waking they fall in love with. Oberon uses the potion for Titania in a way that will cause her to fall in love with a beast or a mortal. 'The next thing then she, waking, looks upon, Be it a lion, bear or wolf, or bull.' This is his way of getting revenge on Titania and once again this shows the audience his lack of compromise and love of deception. When Oberon is speaking to Puck about the flower the potion is made from he talks in rhyming couplets. ...read more.

They declare their love for each other and agree to meet at 'Ninny's tomb', but as Thisbee arrives at the tomb she is scared off by a lion. Pyramus enters full of expectation but sees Thisbe's bloodstained mantle and immediately claims, 'Thus die I.' He irrationally stabs himself but the audience are one step ahead of the characters and knows that Thisbe is not actually dead. When Thisbee finds the body of Pyramus she does the same and kills herself. This shows one of the extremes of what love can cause you to do when it does not run smoothly and the other characters in 'A Midsummer Night's Dream' all echo this when Lysander, Theseus and Demetrius claim that they will die for the woman they are in love with. In conclusion, I think Shakespeare balanced this romantic fantasy with the rough humour of Bottom and his friends. Shakespeare also transports the audience from reality to the magical wood of the fairies and involves them in the play. I hope to have shown how Lysander's claim that 'true love never did run smooth' is supported by other events and I think it is clear that love can make people do many irrational things when it does not run smoothly. Theseus and Hippolyta show us that love can run smoothly in the end but each relationship has its problem. Hermia, Lysander, Demetrius and Helena all reflect the idea of love not running smoothly and show what being in love can make you do. The play remains popular today due to the contemporary relevance of so many of the themes which Shakespeare included and he presents the idea that love is unpredictable and can cause great confusion. Love is something that cannot be explained but only experienced and Shakespeare leaves us to develop our own idea of what love really is. ?? ?? ?? ?? Luke White-Miller Monday, 14 December 2009 How do events in the play support Lysander's claim that, 'The course of true love never did run smooth'? Luke White-Miller Page 1 of 5 Shakespeare.doc ...read more.