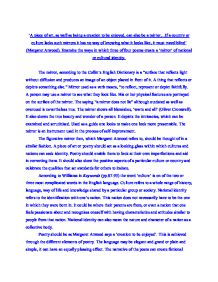 'A piece of art, as well as being a creation to be enjoyed, can also be a mirror...If a country or culture lacks such mirrors it has no way of knowing what it looks like, it must travel blind' (Margaret Atwood).

'A piece of art, as well as being a creation to be enjoyed, can also be a mirror...If a country or culture lacks such mirrors it has no way of knowing what it looks like, it must travel blind' (Margaret Atwood). Examine the ways in which three of four poems create a 'mirror' of national or cultural identity. The mirror, according to the Collin's English Dictionary is a "surface that reflects light without diffusion and produces an image of an object placed in front of it. A thing that reflects or depicts something else." Mirror used as a verb means, "to reflect, represent or depict faithfully. A person may use a mirror to see what they look like. His or her physical features are portrayed on the surface of the mirror. The saying "a mirror does not lie" although outdated as well as overused is nevertheless true. The mirror shows all blemishes, 'warts and all' (Oliver Cromwell). It also shows the true beauty and wonder of a person. It depicts the intricacies, which can be examined and scrutinised. Used as a guide one looks to make one look more presentable. The mirror is an instrument used in the process of self-improvement. The figurative mirror then, which Margaret Atwood refers to, should be thought of in a similar fashion. A piece of art or poetry should act as a looking glass within which cultures and nations can seek identity. Poetry should enable them to look at their own imperfections and aid in correcting them. It should also show the positive aspects of a particular culture or country and celebrate the qualities that set standards for others to imitate. According to Williams in Keywords (pp.87-93) the word 'culture' is on of the two or three most complicated words in the English language. Culture refers to a whole range of history, language, way of life and knowledge shared by a particular group or society. ...read more.

The elegance of the linen tablecloths and the tables each with a "single rose"(32) is contrasted with the common and grungy, "working man's caf�"(34). It is not "haute cuisine"(23) that they serve but "bunny chow"(35) a cheap and filling take-away food eaten mainly by the poor. There is no formality or a worry about etiquette, no "linen"(31), but the food is eaten straight from a plastic top, and there is nowhere to wash one's hands after eating: "wipe your fingers on your jeans"(48). The speaker's anger is a central to the whole poem. In stanza two Afrika achieves a shocking intensity by his line arrangement and repetition. The repetition of "and"(12-15) gives the impression of deep familiarity with the bureaucratic sounding "District Six" (9) and we can understand the sentiment "amiable weeds"(8) more clearly. The listing effect establishes a rhythm and a pattern, which the reader anticipates. This means that when "and"(15) turns into "anger"(16) it comes as a shock. The stanza also concentrates on the sensitive parts of his body, "skin...lungs...eyes"(13-16) all, which are subject and vulnerable to hurt. Anger is also associated closely with heat and fire. It is the "hot...anger of his eyes"(15-16); the sign of the restaurant is "flaring"(18) and his "hands burn"(45). The image of "glass"(17, 30, 41, 47) is very important in the poem (the word appears four times) as well as a reference to "clear panes"(28). It is glass which shuts out the speaker in the poem. It is a symbol of the inequality between whites and blacks, rich and poor. The glass symbolises the exclusion of the blacks from the white's world. But in the glass as well as looking in on outside, one can also see a reflection of oneself. The glass acting as a mirror means that it brings about a double traumatic experience. The speaker sees the standard of living that he has, the stains of "bunny chow" on his jeans, but he also sees the higher standard of living being enjoyed by his (now) ...read more.

There is only one antidote to poison and madness. The soldier's body is ruined, his lungs "froth-corrupted", because of the lies he has ardently imbibed. The only way to stop the ruin of countless bodies is by stopping corruption at its verbal source, "the old lie", which is why the true poet must be truthful. (Kerr, p.97) In the definition of a mirror in the introduction, one keyword was 'faithfully'. A point that should be made about the poetry acting as a mirror and mirrors in general is that everything depends on the individual, culture or nation looking into the mirror. The reflection of the mirror can be interpreted in many ways. And so the significance of the poem may not be a faithful conclusion, but one that is open to discussion. The words on the page do not change and the image in the mirror is constant, it is the reader and the individual who comes to the mirror and the poem with his or her own ideas and experiences that shapes the sense of a poem. Although the poetry may create a mirror that does not lie, it is the cultures or countries that must decide if they want to take into account what the meaning of the poem is. Do they want to change in the light of the revelation that poetry has the power to make? It is the responsibility of the artists; in this case the poets to present the truth as they see it. However the greater burden lies upon the reader or the public. They must analyse the poems, whilst firstly keeping in mind the biases of the poet and secondly realising that they too have a predisposition and are subjective. Only then can they reach some kind of objectivity and only then can they attain some sort of truth, which is the primary purpose of a mirror. ...read more.