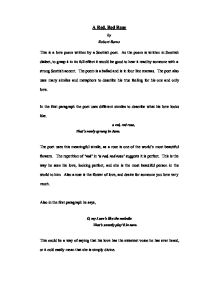 A Red, Red Rose by Robert Burns This is a love poem written by a Scottish poet. As the poem is written in Scottish dialect, to grasp it in its full effect it would be good to hear it read by someone with a strong Scottish accent. The poem is a ballad and is in four line stanzas. The poet also uses many similes and metaphors to describe his true feeling for his one and only love. In the first paragraph the poet uses different similes to describe what his love looks like. a red, red rose, That's newly sprung in June. The poet uses this meaningful simile, as a rose is one of the world's most beautiful flowers. The repetition of 'red' in 'a red, red rose' suggests it is perfect. This is the way he sees his love, looking perfect, and she is the most beautiful person in the world to him. Also a rose is the flower of love, and desire for someone you love very much. Also in the first paragraph he says, O, my Luve's like the melodie That's sweetly play'd in tune. This could be a way of saying that his love has the sweetest voice he has ever heard, or it cold easily mean that she is simply divine. In the second paragraph the poet now tells us how much he is in love with this person and will always love her. ...read more.

Yet they did have romance and passion in their lives and had their own little ways to show their love and affection to on another, even though it was just sitting 'In the teashop's ingle-nook'. Porphyria's Lover By Robert Browning This is a love poem with a difference, written by an English poet influenced by Italy where he wrote the poem. It is a monologue, which gives a dramatic insight into the mind of an abnormally possessive lover. The start of the poem sets the scene. The rain set early in to-night The sullen wind was soon awake. In this verse I picture that it is a cold dark rainy night, and the wind would blow you away. The speaker is sitting by himself in his home. I imagine he lives in an old cottage separated from everyone else, as he is strange man. Also he likes to keep himself, unfamiliar to people. This verse is when his love, Porphyria is first mentioned. I listened with heart fit to break When glided in Porphyria: straight She shut the cold out and the storm I can imagine that he was in his cottage when he suddenly heard Porphyria - with heart fit to break - she glided into the warm cottage and shut the cold storm out. In this verse Porphyria starts to show him all the love and affection she has for him. She sat down by my side And called me. ...read more.

This poem as whole is very melodramatic in all areas. It has all the characteristics of a horror story - a man who was removed from society, a beautiful young lady and a cold stormy night. The main character in the poem also had a serious abnormal problem. He had such a great love for this beautiful young lady called Porphyria, who was very lady like, had long blonde hair and pretty blue eyes. As we read on in the poem he tells us why he did such a terrible thing. He says that he finally knew that she loved him and he never wanted her to stop loving him. He wanted to keep this moment forever and the only way to ensure that she kept this felling for him was to kill her. The three poems I have chosen to deal with the theme of 'Love' gives us an insight to what it means to three different poets. A Red Red, Rose - is poem that would be associated with two young lovers who are madly in love with one another. In A Bath Teashop - would be a type of poem that would suit the older couple, who are still committed and devoted to one another but have their own ways to show their affection to each other. Porphyria's Lover - is a poem that is totally different from any other love poem. It gives a dramatic insight to an abnormal and possessive lover. Who strangles his great love, so that he could cherish there love forever. 9 ...read more.