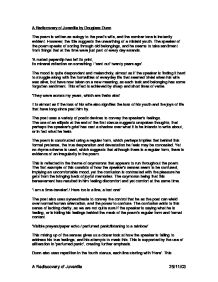 A Rediscovery of Juvenilia by Douglass Dunn.

A Rediscovery of Juvenilia by Douglass Dunn The poem is written as eulogy to the poet's wife, and the somber tone is instantly evident. However, the title suggests the unearthing of a mislaid youth. The speaker of the poem speaks of sorting through old belongings, and he seems to take sentiment from things that at the time were just part of every day errands. 'A rusted paperclip has left its print, its mineral reflection on something I 'sent out' twenty years ago'. The mood is quite despondent and melancholy, almost as if the speaker is finding it hard to struggle along with the formalities of everyday life that seemed trivial when his wife was alive, but have now taken on a new meaning, as each task and belonging has some forgotten sentiment. This effect is achieved by sharp and short lines of verse. 'They wave across my years, which are theirs also' It is almost as if the loss of his wife also signifies the loss of his youth and the joys of life that have long since past him by. ...read more.

'I am a time-traveler! / Here too is a line, a lost one' The poet also uses synaesthesia to convey the control that he as the poet can wield over normal human orientation, and the power to confuse. The confusion adds to this sense of lacking clarity, as we are not quite sure if the speaker is saying what he is feeling, or is hiding his feelings behind the mask of the poem's regular form and formal content. 'Visible prayers/paper echo / perfumed panic/listening to a rainbow' This mixing up of the senses gives us a closer look at how the speaker is failing to address his true feelings, and his attempts to mask this. This is supported by the use of alliteration in 'perfumed panic', creating further emphasis. Dunn also uses repetition in the fourth stanza, each line starting with 'Here'. This resembles the sound of someone who is in denial, and is perhaps convincing themselves that all is not lost. ...read more.

This creates an image of a crestfallen, broken man muttering the answer to an insensitive question to himself as he trudges away. The final couplet signifies the third and final oxymoron that can be found within the lines of the poem. The synaesthesia followed by an ellipsis indicates an end to the speaker's ability to convey his thoughts any further, a sort of inability to continue. 'It is like listening to a rainbow...' However, the final line of the poem states that he intends to 'close the book on it and start again, conjuring up images of a new beginning and an ability to continue once again. This contrasts an inability to continue with an intention of starting again. So we are left with a feeling of un-fulfillment, as we are not sure whether to believe the thoughts and feelings he is illustrating in the poem, or the ones Dunn manages to disguise behind a string of oxymorons, unspoken thoughts and confused emotion. A Rediscovery of Juvenilia 29/11/03 ...read more.