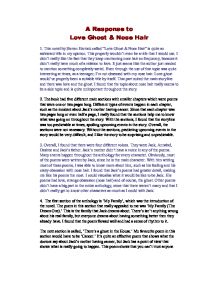 A Response to Love Ghost and Nose Hair

A Response to Love Ghost & Nose Hair 1. This novel by Steven Herrick called "Love Ghost & Nose Hair" is quite an awkward title in my opinion. This properly wouldn't even be a title that I would use. I didn't really like the fact that they keep mentioning nose hair so frequency, because it didn't really have much of a relation to love. It just seems like the author just needed to mention something completely weird. Even through the use of that topic was quite interesting at times, as a teenager; I'm not obsessed with my nose hair. Love ghost would've properly been a suitable title by itself. That part suited the main storyline and there was love and the ghost. I found that the topic about nose hair really seems to be a side topic and is quite unimportant throughout the story. 2. The book had five different main sections with smaller chapters which were poems that were one or two pages long. Different types of events happen in each chapter, such as the incident about Jack's mother having cancer. Since that each chapter was two pages long or even half a page, I really found that the sections help me to know what was going on throughout the story. With the sections, I found that the storyline was too predictable at times, spoiling upcoming events in the story. ...read more.

The first paragraph show why Jack likes her and the second paragraph simply shows how and what he feels about her. The next section of the book is called 'Making a Living'. In this section, I could tell how Jack's dad must've felt in 'The Earthquake'. In this poem, an earthquake occurs and Jack's dad is the only one frighten. The reason why he was scared is because the ghost didn't come to comfort him and he needs the ghost. He wants the ghost to be there, so he gets his wedding photo and imagines about the day he got married. It must be a like a dagger through his heart to lose his wife and still think about her. This final section is 'Echoes'. As the final conclusion, it just about ties all the lose end of the novel. Even through this isn't the very final poem, it wraps all the issues in the novel up and the final conclusion for every character isn't shown very clearly. This poem is all about Jack telling the ghost to go away. Jack realises that it's time to move on and that he doesn't need the ghost to be there for him and his father. This poem is quite powerful in describing Jack's thought by showing in detail about what he thinks is the best thing to do. ...read more.

Besides, love was the main theme of the novel and Jack's obsession about Annabel was projected very well to the reader. Other characters in the anthology are uninteresting and there is nothing too special about them. I was surprised when I found that this was short listed in the 1997 CBCA Awards. 8. If I was able to write a letter to Steven Herrick, I would most likely send a letter about the poetry anthology. I have been curious about the fact that people write poems or songs about their emotions or past when it comes to love. LG&NH involved a lot of love, making me wonder if Steven Herrick wrote every poem about his past or even someone else's life that he knows about. Nose Hair was also another subject in the novel. Steven Herrick may have had an obsession about nose hair when he was a teenager. Of course the names used in the novel would've been different from his real life, but he may have looked back at his childhood and thought that he should express his childhood in a novel. 9. A Place like this is continuing on from the earlier novel, which was LG&NH. I prefer this novel over LG&NH because it really has a different atmosphere of Jack and Annabel's life in the future. The story is still about love, but there is friendship and family with great empathy. This time, every character has detail about them and their life. I can almost say that A Place like this is a must read. Word Count: 1459 words ...read more.