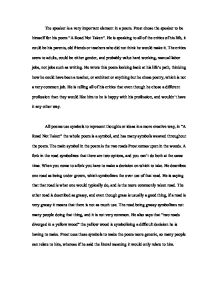 A Road Not Taken

The speaker is a very important element in a poem. Frost chose the speaker to be himself for his poem "A Road Not Taken". He is speaking to all of the critics of his life, it could be his parents, old friends or teachers who did not think he would make it. The critics seem to adults, could be either gender, and probably value hard working, manual labor jobs, not jobs such as writing. He wrote this poem looking back at his life's path, thinking how he could have been a teacher, or architect or anything but he chose poetry, which is not a very common job. He is telling all of his critics that even though he chose a different profession than they would like him to he is happy with his profession, and wouldn't have it any other way. ...read more.

When you come to a fork you have to make a decision on which to take. He describes one road as being under grown, which symbolizes the over use of that road. He is saying that that road is what one would typically do, and is the more commonly taken road. The other road is described as grassy, and even though grass is usually a good thing, if a road is very grassy it means that there is not as much use. The road being grassy symbolizes not many people doing that thing, and it is not very common. He also says that "two roads diverged in a yellow wood" the yellow wood is symbolizing a difficult decision he is having to make. ...read more.

The first stanza discusses the first road he approaches, the second describes the second road, the third stanza goes through the decision he made, and the last stanza is looking back at his decision. Every first and third line rhyme as well as every second, fourth and fifth line. This makes the poem flow, without making it too unprofessional. The rhyme scheme also adds to frost words choice, and arrangement. The line breaks are at the end of a thought, this makes every line to add onto previous ideas, which makes the poem easy to read. The form of "The Road Not Taken" is a simple one, but still gets the point across accurately. Every work of writing has a specific tone, although the tone might not always be completely evident. The tone of "The Road Not Taken" seems to be one of happiness and content. The tone stays the same throughout the poem. ...read more.