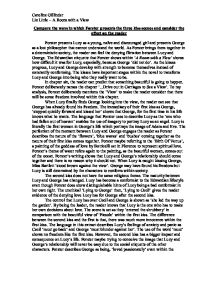 A Room With A View

Compare the ways in which Forster presents the three kiss scenes and consider the effect on the reader Forster presents Lucy as a young, na�ve and discouraged girl and presents George as a lost philosopher that cannot understand the world. As Forster brings them together in a deterministic society, the reader can feel the denying flirtation between Lucy and George. The Edwardian etiquette that Forster shows within 'A Room with a View' shows how difficult it was for Lucy, especially, because George 'did not do'. As the kisses progress, Lucy and George develop with strength to become themselves instead of constantly conforming. The kisses have important stages within the novel to transform Lucy and George into being who they really want to be. In chapter six, the reader can predict that something beautiful is going to happen. Forster deliberately names the chapter '...Drive out in Carriages to See a View'. To my analysis, Forster deliberately mentions the 'View' to make the reader consider that there will be some freedom involved within this chapter. ...read more.

When Lucy is caught kissing George, Miss Bartlett 'stood brown against the view'. George may have found his freedom but Lucy is still determined by the characters to conform within society. The second kiss does not have the same religious theme. The maturity between Lucy and George has changed. Lucy has become a conformist to the Edwardian lifestyle even though Forster does show distinguishable hints of Lucy being a bad conformist in her own right. The unethical 'Lying to George' then, 'Lying to Cecil' gives the reader evidence of the denying love Lucy has for George after the second kiss. The control that Lucy has over Cecil and George is shown as 'she led the way up the garden'. By being the leader, the reader knows that Lucy is the one who has to make her own decisions about love. The scene is set as they 'entered the shrubbery' in comparison with the beautiful view of 'Fiesole' within the first kiss. The difference between the second kiss and the first is that, there was much more innocence within the first kiss. ...read more.

The freedom of their language, for example, 'Why shouldn't I laugh?' shows that there is no reason why you should not be happy. Forster deliberately sets the scene in Florence once more so the reader can compare Lucy and George as the relaxed, secure and happy people to the first time they were in the, 'The Bertolini'. The comparison of Lucy not wanting to even talk to George to indicating 'the spot where a kiss would be welcome' shows the amount of change between the couple. From the first kiss which was a heavenly picture of a goddess to the last kiss which is a realistic image of someone being in love. As the kisses progressed through the novel, Lucy and George developed in strength, mind and power. Lucy could have been taken by Mrs Honeychurch and others into believing that freewill was not the correct way. George who was brought up by Mr Emerson had the instinct to go through life using his freedom as an advantage. However, George needed Lucy determinism to ease him through unanswered questions. ?? ?? ?? ?? Caroline Gillinder Liz Little - A Room with a View ...read more.