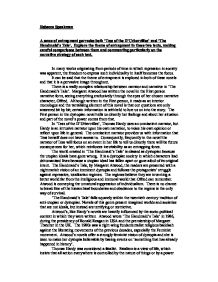 A sense of entrapment pervades both 'Tess of the D'Urbervilles' and 'The Handmaid's Tale'. Explore the theme of entrapment in these two texts, making careful comparisons between them and commenting particularly on the narrative strategy of each text.

Rebecca Speakman A sense of entrapment pervades both 'Tess of the D'Urbervilles' and 'The Handmaid's Tale'. Explore the theme of entrapment in these two texts, making careful comparisons between them and commenting particularly on the narrative strategy of each text. In many works originating from periods of time in which repression in society was apparent, the freedom to express such individuality in itself becomes the focus. It can be said that the theme of entrapment is explored in both of these novels and that it is a pervasive image throughout. There is a really complex relationship between narrator and narrative in 'The Handmaid's Tale'. Margaret Atwood has written the novel in the First person narrative form, seeing everything exclusively through the eyes of her chosen narrative character, Offred. Although written in the First person, it reads as an interior monologue and the tantalising element of this novel is that our questions are only answered bit by bit; certain information is withheld to lure us on into the story. The First person in the dystopian novel tells us directly her feelings and about her situation and part of the novel's power comes from that. ...read more.

Thomas Hardy was considered a fatalist. Fatalism is a view of life, which insists that all action everywhere is controlled by the nature of things or by a power superior to things. It grants the existence of Fate, a great impersonal, primitive force, existing from all eternity, absolutely independent of human will. Due to his fatalistic outlook of life, Hardy presents the character of Tess as having a variety of forces working against her efforts to control her destiny. Tess is a victim of a terrible hostile world in which all creatures are trapped within a cruel structure of determinism. Throughout the novel, Hardy invokes several discrete yet interrelated forms of determinism to make his protagonists fate seem inevitable. Tess is trapped both physically and emotionally in a deterministic universe, a universe in which the characters do not have any real choice or control over events, events that constitute an inexorable march towards some inevitable tragic conclusions. In most of Hardy's works, characterisation is juxtaposed with a capricious fate. Hardy is often seen as a pessimist, about humanity's place in the scene of things, God or Fate. In 'Tess of the D'Urbervilles', fate always reigns supreme, controlling the destinies of characters. ...read more.

It is as if that behind these wrong paths is the sense of how things could have been. Tess only might have only asked why she was doomed to figure in the distorted version of her life, for the question itself is rendered inappropriate in the fact of a universe, which twists order into chaos of wrong meanings. Thus the forces that conspire against Tess go far beyond mere events in which she gets involved and makes wrong decisions. In addition, the narration is everywhere buttressed by words such as, 'doomed' and 'destined' and this extensive use of foreshadowing is typical, especially in the earlier phases of the novel, which reinforce inevitability as an entrapping force for Tess. 'Tess of the D'Urbervilles', like other major works by Hardy, although technically a nineteenth century work, anticipates the twentieth century in regard to the nature and treatment of its subject matter. His works are not only a reflection of his personality but also the contemporary Victorian period. 'Tess of the D'Urbervilles' deals with several significant contemporary issues for Hardy, including the struggles of religious belief that occurred in his lifetime. Thomas Hardy's novel is a traditional realist genre of a tragedy. This genre generates some of the entrapment giving us sense that Tess is doomed from the beginning. ...read more.