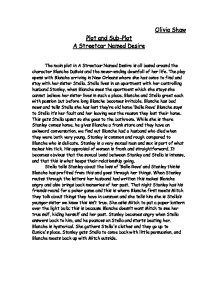 Olivia Shaw Plot and Sub-Plot A Streetcar Named Desire The main plot in A Streetcar Named Desire is all based around the character Blanche DuBois and the never-ending downfall of her life. The play opens with Blanche arriving in New Orleans where she has come to find and stay with her sister Stella. Stella lives in an apartment with her controlling husband Stanley, when Blanche sees the apartment which she stays she cannot believe her sister lives in such a place. Blanche and Stella greet each with passion but before long Blanche becomes irritable. Blanche has bad news and tells Stella she has lost they're old home 'Belle Reve' Blanche says to Stella it's her fault and her leaving was the reason they lost their home. This gets Stella upset so she goes to the bathroom. While she is there Stanley comes home, he gives Blanche a frank stare and they have an awkward conversation, we find out Blanche had a husband who died when they were both very young. ...read more.

She lived at a second-rate hotel called the Flamingo, sharing company with many men. She was involved with a seventeen-year-old boy at her school, which is the reason for her sudden departure. She was also evicted from the hotel, because her personal life was too seedy even for them. Stanley tells Mitch these stories and Mitch stands Blanche up at her birthday dinner. Stanley presents her with the present of a bus ticket out of New Orleans on, and erupts at the table, breaking plates and glasses and scaring both Stella and Blanche even more. Mitch arrives later to talk to the drunk Blanche and she attempts to cover up her drunken state and keep him in her life. They fight and he tells her he wants to sleep with her, but she responds that she will, only if they were married. He tells her she is not clean enough for him and leaves. Blanche believes that she is to leave New Orleans to go on a Caribbean cruise with one of her old beaux, Shep Huntleigh. ...read more.

By Tennessee putting these characters in it gives us an insight of what the future might hold for Stella and Stanley. In 400bc there was a famous Greek philosopher called Aristotle who wrote an essay called 'The Poetics'. This essay was arguing what makes a good tragedy. He said there had to be three vital ingredients to a play. 'A play should be about one character', in A Streetcar Named Desire, Tennessee used Blanche, the tragic heroin the protagonist he based his play around Blanches character. 'A play should be set in one place' Tennessee used New Orleans, with the play begin set in one place this increased the tension, be more intense so more confrontations would occur if there was no where else to escape to. For Blanche's character New Orleans becomes a trap. Aristotle also said 'A play should be set over a 24hr period' Tennessee didn't use this ingredient in his play because we needed time for Stella's pregnancy to develop and cause more conflict. We needed to see Blanche and Mitch's relationship develop and unfold. Also Blanches mental state needed time to deteriorate so we wouldn't feel so shocked when she was taken away by the nurse and doctor. ...read more.