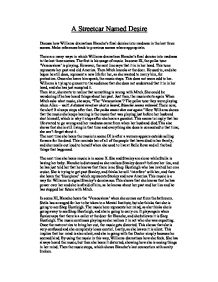 A Streetcar Named Desire Discuss how Williams dramatises Blanche's final demise into madness in the last three scenes. Make references back to previous scenes where appropriate. There are many ways in which Williams dramatises Blanche's final demise into madness in the last three scenes. The first is his usage of music. In scene IX, the polka tune 'Varsouviana' is playing. However, the next line says that it is in her head. This tune represents her past and old America. Then Mitch knocks at the door. He used to, and she hopes he still does, represent a new life for her, as she wanted to marry him, for protection. Once she hears him speak, the music stops. This does not seem odd to her. Williams is trying to present to the audience that she does not understand that it is in her head, and she has just accepted it. Then later, she starts to realise that something is wrong with Mitch. She could be wondering if he has heard things about her past. Just then, the music starts again. When Mitch asks what music, she says; "The 'Varsouviana'? The polka tune they were playing when Allan - wait! A distant revolver shot is heard, Blanche seems relieved. There now, the shot! It always stops after that. ...read more.

How she dresses represents how she is. She tries really hard to always make sure she is clean and dressed nicely, so that she appears clean and nice. She bathes a lot of the time so she feels clean. In scene V she accidentally gets coke on her dress, and she screams, but calms down once she realises it is not stained. Stella asks her; "Blanche, why did you scream like that?" Blanche doesn't give her an answer. This shows that she doesn't really know, or doesn't want to think about it. She also dresses mostly in light colours and white, which represents virginity, where she is trying to forget her past as a prostitute. In the beginning of scene I, the description of her is; "looking as if she were arriving at a summer tea or a cocktail party in the garden district". This shows that this is where she would like to be going, and how she would like to be seen. In scene X, at the beginning of the scene, she is dressed in a crumpled and stained white dress and scuffed shoes; "she has decked herself out in a somewhat soiled and crumpled white satin evening gown and a pair of scuffed silver slippers". This is where she is starting to show her true self, and she is not trying so hard to pretend that she is rich and innocent anymore.This ...read more.

This is what she would have liked to happen, and maybe she doesn't realise that it isn't reality. Earlier in the play she had said; "I don't want realism... I want magic." She also says that she had got a telegram from Shep Huntleigh inviting her on a cruise. Once Stanley tells her this is not true, she sees a 'grotesque and menacing form' in the shadow on the wall. This shows that she is not able to cope with the harsh reality, so she makes it up and believes it. In scene X, Blanche is raped by Stanley. After he tells her that he knows about her past, Blanche starts to see strange reflections on the wall and hear weird noises. This shows that her past is directly linked to her seeing things, and also with her fear of her past and Stanley's dominance over her. It also shows that she cannot cope with her past. In scene XI, it shows Blanche cross fully into madness. She believes that the Doctor coming for her is Shep Huntleigh. When the matron turns up to take her, she lashes out and becomes violent, which she would never have done before as she would have wanted to be seen in a good light. Lastly, when the doctor shows her some kindness, she follows him quietly, as all she wants is kindness and security, even if it is from a stranger. ...read more.