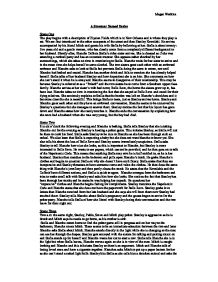 A Streetcar Named Desire Scene One The play begins with a description of Elysian Fields which is in New Orleans and is where they play is set. We are first introduced to the other occupants of the street and then Stanley Kowalski. He arrives accompanied by his friend Mitch and greets his wife Stella by bellowing at her. Stella is about twenty-five years old and a gentle woman, who has clearly come from a completely different background to her husband. Shortly after, Blanche DuBois Stella's older sister arrives. She is dressed as if she was attending a cocktail party and has an uncertain manner. She appears rather shocked by her surroundings, which she takes no time in mentioning to Stella. Blanche waits for her sister to arrive and in the mean time she helps herself to some alcohol. The two sisters greet each other with an awkward embrace and Blanche asks to look at Stella but prevents Stella doing the same in return, not until Blanche had bathed and rested. Blanche has another drink and fails to mention she has already helped herself. Stella talks of her husband Stanley and how dependent she is on him. She comments on how she can't stand it when he is away and Blanche seems to disapprove of their relationship. This may be because Stanley is referred to as a "Polack" and the two sisters have come from a Southern upper class family. Blanche arrives at her sister's with bad news; Belle Reve, the home the sisters grew up in, has been lost. Blanche takes no time in mentioning the fact that she stayed at Belle Reve and cared for their dying relatives. She anxiously explains to Stella that the burden was left on Blanche's shoulders and it becomes clear the she is resentful. This brings Stella to tears, just as Stanley arrives home. Stanley and Blanche greet each other and they have an awkward conversation. ...read more.

Mitch goes on to ask Blanche about her age but she deflects the question. They then go on to talk about Mitch's mother and it is clear that Mitch is devoted to her. Blanche tells Mitch about her late husband - they had been teenagers when they married. The boy was attractive and talented and so Blanche had run away with him. She hadn't realised that the boy had a secret and needed her help. She had found her husband in bed with another man and her husband went on to shoot himself. She could still hear the music they had been dancing to in her head. Mitch gets up with some awkwardness, possibly because of Blanche's sudden openness. Mitch talks to Blanche and says that they both need somebody and that it could be each other. Blanche ends the scene by stating that sometimes there's God so quickly. Scene Seven It is Blanche's birthday, late one afternoon in mid-September. Blanche is bathing and Stanley arrives home with some disturbing information for Stella. Blanche can be heard singing "It's Only A Paper Moon" while Stanley tells Stella of the rumours he has heard. After Belle Reve was lost, Blanche had moved to the Flamingo. They eventually kicked her out on account of all her male guests. She was involved with boys from the nearby military base and had lost her job because of an affair with a seventeen-year-old student. Stella is shocked by what she hears and does not seem to believe the rumours. Blanche notices Stella's upset expression when she calls for a towel. Stella tries to pretend everything is fine. Stanley tells Stella that Mitch will not be attending dinner as Stanley has told him what he has heard. Stanley becomes irritated with Blanche as she is spending so long in the bathroom and Stanley says that she must leave. Blanche returns from the bathroom and Stella tries to act as though nothing has happened but Blanche knows that it has. ...read more.

She allows the doctor to lead her out of the house, telling him she has always depended on the kindness of strangers. Stella calls out to Blanche but she ignores her. Stanley goes to comfort Stella and Steve deals another hand of cards, as if nothing has happened. Themes A Streetcar Named Desire has several themes, which are apparent throughout the play. One of these themes is death. Blanche talks about it in the first scene of the play when she is talking of Belle Reve. She tells Stella how she stayed and struggled, witnessing their relatives dying one by one. It is again mentioned when she meets Mitch and he shows her the inscription on his cigarette case, which was once given to him by a dying woman. Blanche also talks of Allan, her husband who committed suicide. The Mexican woman is selling flowers that are usual for funerals and the dead, which leads Blanche to talk again of Allan. Another theme in the play is the survival. In order to survive and remain with Stanley, Stella has to have her own sister taken away. At the start of the play Stella talks of how horrible it is when Stanley is away and that she needs him. In order for Stella to survive, she must hurt her own sister. Blanche had managed to survive at Belle Reve with all her relatives dying, yet she is the one in the worst situation at the end of the play. Her survival has driven her to insanity and she is taken away, unable to survive anymore with her mental state. Desire is also a theme that we notice throughout the play. Blanche arrives on a streetcar that is in fact called "desire". We again see desire when Mitch and Blanche meet, Blanche eventually admitting she "wants" Mitch. We learn the importance of Stella and Stanley's physical relationship which Blanche comments is just desire. Blanche's desire to marry Mitch and later to escape Elysian Fields is obvious, although none of her desires are fulfilled. Megan Watkins ...read more.