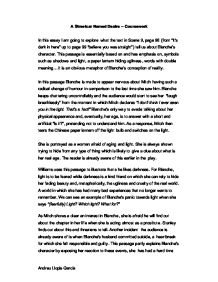 A Streetcar Named Desire - What do we learn about Blanche's character?

A Streetcar Named Desire - Coursework In this essay I am going to explore what the text in Scene 9, page 98 (from "It's dark in here" up to page 99 "believe you was straight") tell us about Blanche's character. This passage is essentially based on and has emphasis on, symbols such as shadows and light, a paper lantern hiding ugliness, words with double meaning... it is an obvious metaphor of Blanche's conception of reality. In this passage Blanche is made to appear nervous about Mitch having such a radical change of humour in comparison to the last time she saw him. Blanche keeps chattering uncontrollably and the audience would start to see her "laugh breathlessly" from the moment in which Mitch declares "I don't think I ever seen you in the light. That's a fact!" ...read more.

We can see an example of Blanche's panic towards light when she says "(fearfully) Light? Which light? What for?" As Mitch shows a clear an interest in Blanche, she is afraid he will find out about the chapter in her life when she is acting almost as a prostitute. Stanley finds out about this and threatens to tell. Another incident the audience is already aware of is when Blanche's husband committed suicide, a heartbreak for which she felt responsible and guilty. This passage partly explains Blanche's character by exposing her reaction to these events, she has had a hard time accepting them and tries to replace truth with utopia. It is easy for an audience to understand why Blanche wants "magic" instead of "realism" after having witnessed this information about her fragile persona during the play. ...read more.

this passage when she says "There is some obscure meaning in this but I fail to catch it" and "What are you leading up to?", as she wants to try to evade the conversation to make Mitch preserve the image of a good-looking lady he has about Blanche, even though she surely knows that Mitch is wishing to have a closer look at her. In conclusion, this passage of the play reinforces the idea of Blanche not just being a character with lunatic dreams. She is proved here to be intelligent and self-aware of creating an imaginary disguised world in which she can retreat and hide from the ugliness of reality. We discover a more mature version of Blanche. Her foolish way of acting is cleared away to illustrate her true feelings, which are profounder than what the reader could have imagined at the beginning of the play. ?? ?? ?? ?? Andreu Llopis Garc�a ...read more.