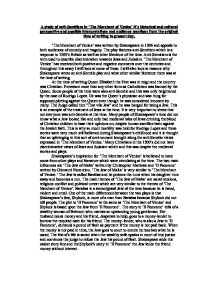 A study of anti-Semitism in 'The Merchant of Venice' it's historical and cultural perspective and possible interpretations and audience reactions from the original time of writing to present day.

A study of anti-Semitism in 'The Merchant of Venice' it's historical and cultural perspective and possible interpretations and audience reactions from the original time of writing to present day. 'The Merchant of Venice' was written by Shakespeare in 1596 and appeals to both audiences of comedy and tragedy. The play features anti-Semitism which is a response to 1500's Britain as well as other literature of the time. Anti-Semitism is the term used to describe discrimination towards Jews and Judaism. 'The Merchant of Venice' has received both positive and negative comments over the centuries and throughout this essay I will look at some of these. I will also look at reasons why Shakespeare wrote an anti-Semitic play and what other similar literature there was at the time of writing. At the time of writing Queen Elizabeth the First was in reign and the country was Christian. Protestant more than any other form as Catholicism was banned by the Queen. Some people of the time were also anti-Semitic and this was only heightened by the case of Rodrigo Lopez. He was the Queen's physician and was hung for supposed plotting against the Queen even though he was considered innocent by many. ...read more.

Shylock is expressed as cold and calculating. He anticipates a victory in the court and begins to sharpen his knife to take his forfeiture. "Why dost thou whet thy knife so earnestly?" The reaction to Shylock by the court is also a mirror image of the court in the Rodrigo Lopez case. The Duke is prejudice and this makes a big difference to the public view. Shakespeare presents Shylock in a bad light in the court by making him cold, callous and ready to take his revenge. The Duke, who is Christian, is also put in a bad light with his bias within the court room setting. I think Shakespeare did this to prove that his play was not a piece of anti-semitic propaganda of the 1500's. Shylock has no chance of winning the favour of the court for any reason other than the fact that the rules cannot be bent. The Duke refers to him as 'the Jew' and this is within a court of Venetian law. It is later discovered that Shylock had not made his contract very well because it only allowed him to take one pound of human flesh from Antonio but no blood. ...read more.

A recent film starring Al Pacino caused controversy and also had a very different idea about the relationship between Antonio and Bassanio. This presentation of 'The Merchant of Venice' includes a kiss between the two characters and this was because many people believe that Shakespeare intended the two characters to be gay but married to woman. These are two of many interpretations of the play. The play features many aspects of Anti-semitic behaviour and Shakespeare, I think, is using current affairs of the 1500's as well along with other literature to create a play of the moment. Shakespeare also took the views of the general public and created a play that people would go to see. The popularity of the Rodrigo Lopez case meant that hatred of Jews was a big seller in Elizabethan England. It is important to remember that anti-Semitism is something that still exists but the prejudice of the 16th century has been diminished. The holocaust of the 20th century is the biggest attack on the Jewish faith and is, hopefully, the last time anti-Semitic prejudice is inflicted on the rest of the world. I don't believe Shakespeare was personally anti-semitic but I do believe he used the mob mentality and anti-Semitic views of 16th century England to sell tickets and gain popularity. ...read more.