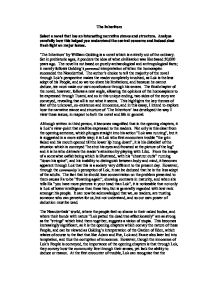 A study of how the narative stance of The Inheritors by William Golding has helped me understand the central concerns of the novel, and shed light on major issues.

The Inheritors Select a novel that has an interesting narrative stance and structure. Analyse carefully how this helped you understand the central concerns and indeed shed fresh light on major issues. 'The Inheritors' by William Golding is a novel which is entirely out of the ordinary. Set in prehistoric ages, it ponders the idea of what civilisation was like based 50,000 years ago. The novel is not based on purely archaeological and anthropological facts; it merely follows Golding's personal interpretation of when the homosapien succeeded the Neanderthal. The author's choice to tell the majority of the novel through Lok's perspective makes the reader completely involved, as Lok is the less adept of his People, and so we too share his limitations, and because he cannot deduce, we must make our own conclusions through his senses. The final chapter of the novel, however, follows a new angle, allowing the opinions of the homosapiens to be expressed through Tuami, and so in this unique ending, two sides of the story are conveyed, revealing that all is not what it seems. This highlights the key themes of fear of the unknown, co-existence and innocence, and in this essay, I intend to explore how the narrative stance and structure of 'The Inheritors' has developed the way I view these issues, in respect to both the novel and life in general. Although written in third person, it becomes magnified that in the opening chapters, it is Lok's view-point that shall be expressed to the readers. Not only is this clear from the opening sentence, which plunges straight into his action "Lok was running", but it is suggested in a more subtle way; it is Lok who first encounters trouble "the grin faded and his mouth opened ...read more.

This enables both he and the reader to draw comparisons between objects he previously had merged together; while previously he believed "fungi on a tree were ears", he now can recognise that they are not ears, but they do resemble them. This proves to be very meaningful, as now Lok can distinguish the differences between the two colonisations, both mentally and physically, and can see that "they were thinkable and not a random and unrelated irruption". This ability to draw comparisons allows Lok to make the vital realizations that the New People are not the same as his own, and are in fact, dangerous, like a "famished wolf", both savage and deadly. While Lok can also recognise their positive traits, he also compares them to the Fall "they are a people of the fall; nothing stands against them", and this suggests how he fears their empowering nature. Yet the boldest conclusion that Lok can deduce for the reader is that "The are like Oa", signifying how the homosapiens control life, and they control fear. Although Lok is forced to come to understanding purely due to his circumstance, it is important to the reader that he does, as it allows for a broader understanding of the differences between these two civilisations, on a much larger scale than just good versus evil. After the demise of Fa, a change of narrative perspective can be seen to a neutral stance "the red creature stood on the edge of the terrace and did nothing". Though the last chapter must be read to fully understand this, the "red creature" which is referred to is Lok, this is the first time that he or his actions have ever been described to the reader. ...read more.

as he realises the error of his people's materialistic ways, and as he begins to ponder of a future with new values. In conclusion, the narrative stance and the structure of 'The Inheritors' have played a great impact on my understanding of the central concerns of the novel. Indeed having read a majority of the novel through the perspective of Lok, the genuine innocence of the Neanderthal community becomes apparent, and this presence of innocence becomes all the more clear as it is abused and corrupted by the opposing cultivation. Typically, this should have meant that the New People should be regarded as the epitome of evil, but because their perspective was offered before the conclusion of the novel, and because Tuami's words were of regret and not honour, the reader has to realise that they too have become a victim of prejudice. It is this fear of the unknown which evoked the actions of the New People, and although this does not justify the demise of the Neanderthal, it has taught me a valuable lesson about how to respond to something which you do not understand. Above all, co-existence is a dominant theme in 'The Inheritors' as it shows us that the homosapiens proved incapable of living as neighbours with a different race, but that our society is capable, and that we should learn from their mistakes. The novel's stance and structure is fundamentally integral in the understanding of the central themes of the novel, as it not only shows the self-development of these opposing communities, but also takes the reader on a journey of self discovery. Above all, this is why I feel it has aided my awareness of these issues in both the novel, and my life in general. ...read more.