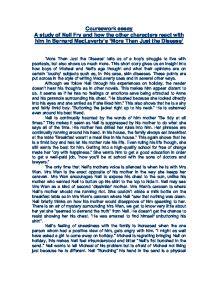 A study of Neil Fry and how the other characters react with him in Bernard MacLaverty's 'More Than Just the Disease'.

Coursework essay A study of Neil Fry and how the other characters react with him in Bernard MacLaverty's 'More Than Just the Disease' 'More Than Just the Disease' tells us of a boy's struggle to live with psoriasis, but also shows us much more. This short story gives us an insight into how boys of Michael and Neil's age thought and what their opinions are on certain 'touchy' subjects such as, in this case, skin diseases. These points are put across in the style of writing MacLaverty uses and in several other ways. Although we follow Neil through his experiences on holiday, the reader doesn't hear his thoughts as in other novels. This makes him appear distant to us. It seems as if he has no feelings or emotions save being attracted to Anne and his paranoia surrounding his chest. "He blushed because she looked directly into his eyes and she smiled as if she liked him." This also shows that he is a shy and fairly timid boy. "Buttoning the jacket right up to his neck." ...read more.

Neil may see Mrs Wan as a kind of second 'dissimilar' mother. Mrs Wan's caravan is where Neil's mother should me running riot. She couldn't abide a milk bottle on the breakfast table so in Mrs Wan's caravan where Neil "saw that nothing was clean. Neil briefly thinks on how his mother would disapprove of him speaking to her. There is an air of mystery surrounding Mrs Wan, we get to know very little about her yet she "seemed to demand the truth" from Neil. He doesn't get the chance to resist showing her his chest. "He was amazed to find himself unbuttoning his shirt". Neil's feeling of uneasiness with the family is increased when the one person whom had a positive view of him, gets angry with him. "I might as well have asked a girl to come away on holiday." Michael is regretting bringing Neil on holiday, this makes Neil feel misunderstood and bitter "Neil's fist bunched in the sand." Neil wants to tell Michael of his problem but is afraid of Michael not liking just because he is different. ...read more.

How can he feel so bad about his chest, when he criticises others about their irregularities as well? I believe he holds different principles for himself and for others just as inauspicious as him. Recapitulating Michael is drawn out to be the troublesome friend that sometimes he gets on with, never the less still infuriating one now and again. Mrs Wan, in her decrepit caravan, is seen to be the exact opposite of Neil's mother. However acting as a makeshift substitute for her in his time of need. Helping Neil to realise how his disease is consuming him. Anne is a target in society Neil is aiming to reach, not minding about anyone's opinion of him and feeling at ease in any situation. Neil's mother, with her voice constantly nagging inside of his head represents the changing attitudes in modern day living. No longer are people desperate to impress with standards and achievements. Ultimately Neil's disease has, in all essence, wormed its way into his brain as well as being on his chest. It had consumed him. This is something that should not happen to anyone. Matters of life must be kept aboveboard. Word count: 947 ...read more.