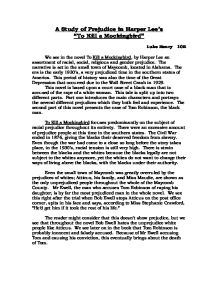 A Study of Prejudice in Harper Lee's &quot;To Kill a Mockingbird&quot;.

A Study of Prejudice in Harper Lee's "To Kill a Mockingbird" Luke Henry 10R We see in the novel To Kill a Mockingbird, by Harper Lee an assortment of racial, social, religious and gender prejudice. The narrative is set in the small town of Maycomb, located in Alabama. The era is the early 1930's, a very prejudiced time in the southern states of America. This period of history was also the time of the Great Depression that occurred due to the Wall Street Crash in 1929. This novel is based upon a court case of a black man that is accused of the rape of a white woman. This tale is split up into two different parts. Part one introduces the main characters and portrays the several different prejudices which they both feel and experience. The second part of this novel presents the case of Tom Robinson, the black man. To Kill a Mockingbird focuses predominantly on the subject of racial prejudice throughout its entirety. There were an excessive amount of prejudice people at this time in the southern states. The Civil War ended in 1876, giving the blacks their deserved freedom from slavery. Even though the war had come to a close so long before the story takes place, in the 1930's, racial tension is still very high. There is strain between the blacks and the whites because the blacks legally are not subject to the whites anymore, yet the whites do not want to change their ways of living above the blacks, with the blacks under their authority. ...read more.

We see that women were treated more as servants and maids than as wives and helpers in the 1930's. They were not allowed to sit on a jury because they were considered too frail. At the beginning of the book, Scout relates, "I sat at the little table in the dining room; Jem and Francis sat with the adults at the dinning table." Scout feels that Aunty dislikes her because she isn't enough of a lady. We believe Scout's aunt is unreasonable in her demand on her to sit alone, because at such a young age it is abnormal for a young girl to sit still and try to be a lady. Throughout the novel, Scout is constantly embarrassed by, or embarrasses her aunty because of her continuous tom-boy attitude. The second strongest discrimination that is shown in this story is the social prejudice of Maycomb County. The Ewells are perceived as low down people, because they are poor and dirty and never going to school. They are despised by the middle class almost as much as blacks of Maycomb. Another poor family that is depicted, is the Cunningham's. When Walter Cunningham comes over for dinner, he "poured syrup on his vegetables, and meat...and probably would have poured it into his milk glass if (Scout) hadn't asked him what the sam hill he was doing." The book displays the Cunningham's as honest and upright people, "they never took anything they couldn't pay back" but because of their poverty they are looked down upon in the society. ...read more.

These two persons are harmless to society, yet because of the time and age, they are looked down upon and despised. This is the real sin, because they are not only harmless, but defenceless. Religious prejudice plays a small part in the book, when Cal, the family's black maid, took the children to a black church named First Purchase African M.E. Church. There was a big, tall Black woman called Lula and she objected to Cal bringing Scout and Jem to the black church. Lula "wants to know why you bringin' white chillum to a nigger church." This shows that the churches are segregated from each other, and that the Black church does not accept white people and the white church does not accept the Black people. We see later on that the children are asked to stay; this is because their father Atticus is not prejudiced and is defending Tom Robinson. The discrimination and intolerance that Harper Lee is really trying to expose is racial prejudice. This book has caused millions of people to consider the effect that racial prejudice really has. Tom Robinson is killed trying to escape from jail, because although Atticus proved that he was innocent, the jury still convicted him. The story ends with Boo finally coming out of his house, to save Jem and Scout from Mr Ewell, who tries to kill them, showing the children that the way that had imagined Boo was wrong. Over-all, this book teaches everyone something important about prejudice and how to live in the world today. ...read more.