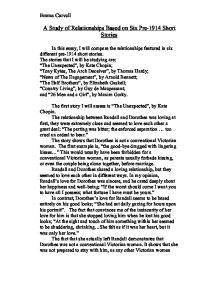 A Study of Relationships Based on Six Pre-1914 Short Stories

A Study of Relationships Based on Six Pre-1914 Short Stories In this essay, I will compare the relationships featured in six different pre-1914 short stories. The stories that I will be studying are: "The Unexpected", by Kate Chopin; "Tony Kytes, The Arch Deceiver", by Thomas Hardy; "News of The Engagement", by Arnold Bennett; "The Half Brothers", by Elizabeth Gaskell; "Country Living", by Guy de Maupassant; and "26 Men and a Girl", by Maxim Gorky. The first story I will assess is "The Unexpected", by Kate Chopin. The relationship between Randall and Dorothea was loving at first, they were extremely close and seemed to love each other a great deal: "The parting was bitter; the enforced separation ... too cruel an ordeal to bear." The story shows that Dorothea is not a conventional Victorian woman. The first example is, "the good-bye dragged with lingering kisses..." This would usually have been forbidden for a conventional Victorian woman, as parents usually forbade kissing, or even the couple being alone together, before marriage. Randall and Dorothea shared a loving relationship, but they seemed to love each other in different ways. In my opinion, Randall's love for Dorothea was sincere, and he cared deeply about her happiness and well-being: "If the worst should come I want you to have all I possess; what fortune I have must be yours." In contrast, Dorothea's love for Randall seems to be based entirely on his good looks; "She had sat daily gazing for hours upon his portrait". The fact that convinces me of the insincerity of her love for him is that she stopped loving him when he lost his good looks; "At the sight and touch of him something within her seemed to be shuddering, shrinking...She felt as if it was her heart, but it was only her love." The fact that she actually left Randall demonstrates that Dorothea was not a conventional Victorian woman. ...read more.

"...how we lay together thus by our dying mother... I reckon she sees us now... we shall soon be with her" William Preston had a change of heart towards Gregory; the fact that Gregory saved his son's life made him come to his senses, and realise how harshly he had treated him. "My father's last words were, 'God forgive me my hardness of heart towards the fatherless child!'" The first two stories, "The Unexpected", and "Tony Kytes, The Arch Deceiver" were tales of people being selfish and shallow, as I have previously mentioned. However "News of The Engagement" and "The Half Brothers" are stories about love and unselfishness. In "News of The Engagement", Phillip eventually decided not to tell his mother and Mr Nixon of his engagement so "that I would not intrude my joy on hers", as he wanted his mother to enjoy her happiness, instead of being distracted by his. He also was not annoyed to discover that someone else was important to his mother apart from him: "'I'm delighted.'" In "The Half Brothers", Mother was unselfish, because she married a man she didn't love just to ensure her child's happiness, and was nice to him, in spite of this: "A more dutiful wife...could never have been." Aunt Fanny was also unselfish: "She...thought more of her sister's welfare than she did of her own" The next story I will analyse is "Country Living" by Guy de Maupassant. This story is about sense of duty; the importance of good reputation in a small country community; the relationship between two neighbouring families; and the gulf between the rich and poor at that time. The Tuvache family insisted that they loved their children, but the feelings were more of duty than love. "...none too sure which of the heaving brood were theirs...quite incapable of telling them apart." When a rich couple offered to adopt their son, they were outraged that people with money were able to just come and offer to buy their child. ...read more.

Nevertheless, the relationship between Mother and Mr Nixon does conform to Gorky's claim; "People always need someone to love". The story shows that, even though she is a widowed old woman with a son, Sarah (Mother) still needs somebody to love. "The Half Brothers" is similar to "26 Men and a Girl", as both stories loosely describe a change of opinion about a character, which causes that person to be treated completely differently. This comes up when Mr Preston regrets treating Gregory badly after he saves his only (real) son, and the 26 men hurling abuse at the girl who was once their idol, after she failed to live up to their expectations. "Country Living" and "26 Men and a Girl" both end with the rejection of a member of the relationship. In "Country Living" it is because Charlot realised that he would have been better off if he had been 'sold', and Tanya realises that the 26 men had not been as kind as she thought. So both relationships ended with the realisation of a fact that had been true all along. Most of the relationships in this selection seem to focus on love. Although some of the relationships are not based on love, the characters always seem to love something or someone. For example, William Preston's relationship with Gregory was based on hatred and jealousy, but he truly loved Gregory's mother. In "26 Men and a Girl", Maxim Gorky explains this: "Like all human beings, we were unable to exist without worshipping at least something...People always need somebody to love." The relationships in all six stories, and even real-life relationships, all show this to be true. Randall's love for Dorothea, Milly, Unity and Hannah's love for Tony, the Mother's love for Mr Nixon, and the love that 26 bakery workers have for a girl who they barely know, exist because all people need to love something, or someone. For some this love is insincere, and for some it is true, but for everyone it exists. Emma Carvell ...read more.