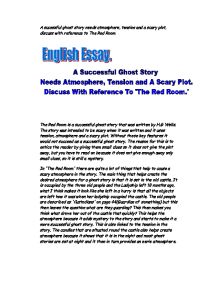 A sucessful ghost story needs atmosphere, tension and a scary plot, discuss with reference to The Red Room

A sucessful ghost story needs atmosphere, tension and a scary plot, discuss with reference to The Red Room The Red Room is a successful ghost story that was written by H.G Wells. The story was intended to be scary when it was written and it uses tension, atmosphere and a scary plot. Without these key features it would not succeed as a successful ghost story. The reason for this is to entice the reader by giving them small clues so it does not give the plot away, but you have to read on because it does not give enough away only small clues, so it is still a mystery. In 'The Red Room' there are quite a lot of things that help to cause a scary atmosphere in the story. The main thing that helps create the desired atmosphere for a ghost story is that it is set in the old castle. It is occupied by the three old people and the Ladyship left 18 months ago, what I think makes it look like she left in a hurry is that all the objects are left how it was when her ladyship occupied the castle. ...read more.

Incidents such as the Duke dying and the countess. 'In which the young Duke had died.' Also the old people build up the tension because they are nervous before he goes to the Red Room. 'Are you really going?' This makes you think that what could be in that room to make the old people to be so nervous and afraid of the room. On the way to the Red Room it is a point in the story that has quite a lot of tension because as the narrator walks through the long corridors of the abandoned castle he does not know what is round each corner. This then starts to play on his mind about whether there is something with him. 'Moonlight picked out everything in vivid black shadow and silvery illumination. '....my candle flared... as the shadows cover and quiver.' This shows that the narrator starts to think that the shadows are actually some sort of living thing that is following him or stalking him. The candles going out in the Red Room when the narrator is actually in 'The Red Room' that is probably the biggest tension builder in the story. 'As I stood undecided, an invisible hand seemed to sweep out the two candles on the table. ...read more.

This separates it from other ghost stories because it makes it different because it has the same characteristics of other ghost stories, which is a good thing as it fits into the genre of other Ghost Stories. The fact that it is questionable to whether there is actually a spiritual being in the Red Room in the castle also helps towards 'The Red Room' being a scary story because it shows that there might be a spiritual being but there might not be. This helps towards the plot being scary because if there is not a spiritual being in 'The Red Room' then what is there in the Red Room? This is the whole point of the story as it leaves it up to your own imagination and fear to determine what is in 'The Red Room.' H.G Wells has created a successful ghost story by using the three main aspects of atmosphere, tension and a scary plot. H.G Wells uses them so when you read it you see images of what it is like and draw your own conclusions of situations in the story. H.G Wells twists the story and it becomes something different which gives it a mysterious plot as well as a scary plot. It is a good portrayed ghost story, which you have to follow closely to see how it is scary and why. ...read more.