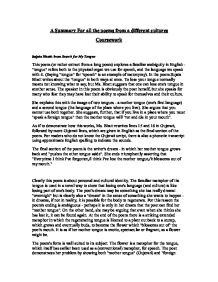 A Summary For all the poems from a different cultures.

A Summary For all the poems from a different cultures Coursework Sujata Bhatt: from Search for My Tongue This poem (or rather extract from a long poem) explores a familiar ambiguity in English - "tongue" refers both to the physical organ we use for speech, and the language we speak with it. (Saying "tongue" for "speech" is an example of metonymy). In the poem Sujata Bhatt writes about the "tongue" in both ways at once. To lose your tongue normally means not knowing what to say, but Ms. Bhatt suggests that one can lose one's tongue in another sense. The speaker in this poem is obviously the poet herself, but she speaks for many who fear they may have lost their ability to speak for themselves and their culture. She explains this with the image of two tongues - a mother tongue (one's first language) and a second tongue (the language of the place where you live). She argues that you cannot use both together. She suggests, further, that if you live in a place where you must "speak a foreign tongue" then the mother tongue will "rot and die in your mouth". As if to demonstrate how this works, Ms. Bhatt rewrites lines 15 and 16 in Gujerati, followed by more Gujerati lines, which are given in English as the final section of the poem. For readers who do not know the Gujerati script, there is also a phonetic transcript using approximate English spelling to indicate the sounds. The final section of the poem is the writer's dream - in which her mother tongue grows back and "pushes the other tongue aside". She ends triumphantly asserting that "Everytime I think I've forgotten,/I think I've lost the mother tongue,/it blossoms out of my mouth." Clearly this poem is about personal and cultural identity. The familiar metaphor of the tongue is used in a novel way to show that losing one's language (and culture) ...read more.

The opening lines of the poem compare human skin to a seedpod, drying out till it cracks. Why? Because there is "never enough water". Ms. Dharker asks the reader to imagine it dripping slowly into a cup. When the "municipal pipe" (the main pipe supplying a town) bursts, it is seen as unexpected good luck (a "sudden rush of fortune"), and everyone rushes to help themselves. But the end of the poem reminds us of the sun, which causes skin to crack "like a pod" - today's blessing is tomorrow's drought. The poet celebrates the joyous sense with which the people, especially the children, come to life when there is, for once, more than "enough water". The poem has a single central metaphor - the giving of water as a "blessing" from a "kindly god". The religious metaphor is repeated, as the bursting of the pipe becomes a "rush of fortune", and the people who come to claim the water are described as a "congregation" (people gathering for worship). The water is a source of other metaphors - fortune is seen as a "rush" (like water rushing out of the burst pipe), and the sound of the flow is matched by that of the people who seek it - their tongues are a "roar", like the gushing water. Most tellingly of all, water is likened to "silver" which "crashes to the ground". In India (where Ms. Dharker lives), in Pakistan (from where she comes) and in other Asian countries, it is common for wealthy people to throw silver coins to the ground, for the poor to pick up. The water from the burst pipe is like this - a short-lived "blessing for a few". But there is no regular supply of "silver". And finally, the light from the sun is seen as "liquid" - yet the sun aggravates the problems of drought. The poem is written in unrhymed lines, mostly brief, some of which run on, while others are end-stopped, creating an effect of natural speech. ...read more.

and the bright sign which shows its name is meant for white customers only. There is no sign to show this (as there would have been under apartheid) but black and coloured people, being poor, will not be allowed past the "guard at the gatepost". The "whites only inn" is elegant, with linen tablecloths and a "single rose" on each table. It is contrasted with the fast-food "working man's cafe" which sells the local snack ("bunny chows"). There is no table cloth, just a plastic top, and there is nowhere to wash one's hands after eating: "wipe your fingers on your jeans". In the third stanza the sense of contrast is most clear: the smart inn "squats" amid "grass and weeds". Perhaps the most important image in the poem is that of the "glass" which shuts out the speaker in the poem. It is a symbol of the divisions of colour, and class - often the same thing in South Africa. As he backs away from it at the end of the poem, Afrika sees himself as a "boy again", who has left the imprint of his "small, mean mouth" on the glass. He wants "a stone, a bomb" to break the glass - he may wish literally to break the window of this inn, but this is clearly meant in a symbolic sense. He wants to break down the system, which separates white and black, rich and poor, in South Africa. The title of the poem suggests not just that things have not changed, but a disappointment that an expected change has not happened. The poem uses the technique of contrast to explore the theme of inequality. It has a clear structure of eight-line stanzas. The lines are short, of varying length, but usually with two stressed syllables. The poet assumes that the reader knows South Africa, referring to places, plants and local food. The poem is obviously about the unfairness of a country where "Nothing's changed". But this protest could also apply to other countries where those in power resist progress and deny justice to the common people. ...read more.