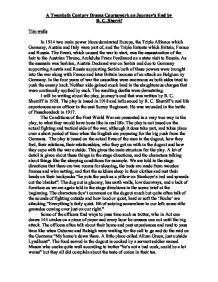 A Twentieth Century Drama Coursework on Journey's End by R. C. Sherrif Tim wells In 1914 two main power blocs dominated Europe, the Triple Alliance which Germany, Austria and Italy were part of, and the Triple Entente which Britain, France and Russia. The Event, which caused the war to start, was the assassination of the heir to the Austrian Throne, Archduke Franz Ferdinand on a state visit to Bosnia. As the assassin was Serbian, Austria Declared war on Serbia and due to Germany supporting Austria and Russia supporting Serbia both of these powers were brought into the war along with France and later Britain because of an attack on Belgium by Germany. In the four years of war the casualties were enormous as both sides tried to push the enemy back. Neither side gained much land in the slaughterous charges that were continually applied by each. The resulting deaths were devastating. I will be writing about the play, journey's end that was written by R. C. Sherriff in 1928. The play is based in 1918 and influenced by R. C. Sherriff's real life experiences as an officer in the east Surrey Regiment. He was wounded in the battle of Passchendack in 1917. The Conditions of the First World War are presented in a very true way in the play, to what they would have been like in real life. The play is not based on the actual fighting and tactical side of the war, although it does take part, and takes place over a short period of time when the English are preparing for the big push from the Germans. ...read more.

Stanhope confesses to Osborne about his troubles and treats him as someone to talk to. This is why Osborne understands Stanhope more, and why he stands up for him, we have proof of this in act one: Osborne: And because he stuck it till his nerves have got battered to bits he's called a drunkard. Hardy: Not a drunkard; just a - just a hard drinker; but you're quite right about his nerves. They are all to blazes. Last time out resting we were playing bridge and something happened - I don't remember what it was; some silly little argument - and all of a sudden he jumped up and knocked al the glasses off the table! Lost control of himself; and then he - sort of - came to - and cried - Osborne: Yes I know. Hardy: You heard about it? Osborne: He told me. Stanhope shows great leadership throughout the play and when talking to officers and lower ranking people he speaks strongly with a great tone of authority and nobleness. Like when Hibbert declared he had to leave due to neuralgia. Stanhope saw through Hibbert though he knew Hibbert was scared and wanted to escape his fear. He realised Hibbert felt the same as himself. Stanhope confesses his own fear as a parallel to this in a very cunning act which eventually resulted in Hibbert being convinced to stay and overcome his cowardice as Stanhope was. I thought this was an excellent method, to use his own case as a parallel to make Hibbert feel guilt which in turn made him realise his selfishness and decide to back down. ...read more.

Hibbert's cowardice is dealt with by Stanhope who offers his own weakness as a parallel. The play also emphasises the class differences between the officers and the lower ranks. Mason the soldier-cook is the source of most of the humour in the play. We do not laugh at Mason but we laugh with his because he is clever enough to make the most of an impossible situation. It is still made clear that Mason is a servant and that it is his duty to stay awake and wake the officers so that they may go on watch. Stanhope's fury after he finds that Raleigh has been dining with the men is a complex reaction to Raleigh's being there at all, especially since he, Stanhope, has his drinking problem to hide. Raleigh is innocent, ignorant and does not answer back and is so keen to be a good soldier and so his death seems inevitable. Raleigh's character represents the young men who were as good as slaughtered in their hundeds of thousands in the Great War. I can conclude that this play is an emotional display of the feelings, comradeship, and the affects of the war on the officers at war. The play's significance and reason behind it is to bring in to the light how, and what it was like for the men at war emotionally. The cast would have a varied array of characters from the fruity, humour of Mason to the seriousness leadership and flaws of Stanhope. I enjoyed reading and studying this play and have learnt how to interpret world war one jargon and scripts of this period with great understanding. I now feel confident in arranging my essays in a suitable manner for the future. ...read more.