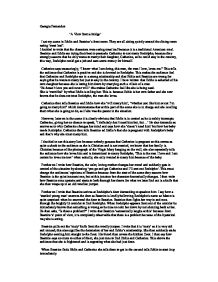 'A View from a bridge' - I set my scene in Eddie and Beatrice's front room. They are all sitting quietly around the dining room eating 'meat loaf'.

Georgia Fernandez 'A View from a bridge' I set my scene in Eddie and Beatrice's front room. They are all sitting quietly around the dining room eating 'meat loaf'. I decided to write that the characters were eating meat loaf because it is a traditional American meal. Beatrice and Eddie are trying their best to persuade Catherine to not marry Rodolpho, because they strongly assume that he only wants to marry their daughter, Catherine, so he could stay in the country, this way, Rodolpho could get a job and earn some money for himself. Catherine says reassuringly, "I know what I am doing, this man, the man I love, loves me." This tells the audience that Catherine is positive and she is devoted to Rodolpho. This makes the audience feel that Catherine and Rodolpho are in a strong relationship and that Eddie and Beatrice are wrong for saying that he wants to marry her just to stay in the country. ...read more.

Catherine then tells Beatrice ad Eddie's that she is pregnant with Rodolpho's baby and that's why she must marry him. I decided to use this story line because nobody guesses that Catherine is pregnant so this comes as quite a shock to the audience as she is Christian and is not married, we know that her family is Christian because of the photograph of the Virgin Mary hanging on the wall, she also repeatedly tells the audience how she loves him and is determined to marry Rodolpho, 'This is the man I love and I am certain he loves me too!' when actually, she only wanted to marry him because of the baby. Further on I write how Beatrice, the calm, loving mother changes her mood and suddenly gets in control of the situation by shouting 'you go and get Catherine and I'll sort out Rodolpho'. This must change the audiences' opinions of Beatrice because from the start of the scene they assume how Beatrice is the quiet innocent one, but at this juncture her character dramatically changes. ...read more.

She then suddenly stabs Rodolpho sending him straight to the floor. His blood then covers the kitchen floor. I then say how Beatrice says no more to either of them, she just runs to find Eddie and Catherine. This shows the audience that she is frightened and is regretting what she had just done. When Beatrice finds Eddie and Catherine she tells them to get in the car and tells Eddie to start it up immediately. My last stage direction is of Beatrice, Catherine and Eddie 'driving of into the sunset' because I tried to make it sound like a cliffhanger so people would want to know what happened next. Finally I write a piece that Alfieri says. It starts by him saying 'What went wrong?' I wrote this because it is a rhetorical question that everyone has to think about for themselves. He then says how he is surprised that it was the 'sweet, polite, Beatrice', which adds a dramatic twist, this shows that he was very shocked that Beatrice would do such a thing. ...read more.