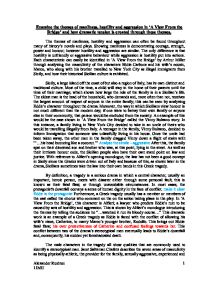 A View From the Bridge

Examine the themes of manliness, hostility and aggression in 'A View From the Bridge' and how dramatic tension is created through these themes. The themes of manliness, hostility and aggression can often be found throughout many of history's novels and plays. Showing manliness is demonstrating courage, strength, power and honour; however hostility and aggression are similar. The only difference is that hostility is unfriendly or aggressive behaviour while aggression is hostility put into actions. Each characteristic can easily be identified in 'A View From the Bridge' by Arthur Miller through analyzing the masculinity of the characters Eddie Carbone and his wife's cousin, Marco, who along with his brother travelled to New York City as illegal immigrants from Sicily, and how their historical Sicilian culture is exhibited. Sicily, a large island off the coast of but also a region of Italy, has its own distinct and traditional culture. Most of the time, a child will stay in the home of their parents until the time of their marriage; which shows how large the role of the family is in a Sicilian's life. The eldest man is the head of the household, who demands and, more often than not, receives the largest amount of respect of anyone in the entire family; this can be seen by analyzing Eddie's character throughout the drama. Moreover, the way in which Sicilians view honour is not much different than the modern day; if one were to betray their own family or anyone else in their community, that person would be excluded from the society. An example of this would be the case shown in 'A View From the Bridge' called the Vinny Bolzano story. In this instance, a family living in New York City decided to take in an uncle of theirs who would be travelling illegally from Italy. A teenager in the family, Vinny Bolzano, decided to inform Immigration that someone was unlawfully living in his house. ...read more.

All of this together creates a very nerve-racking scene for Eddie but also a very enticing scene as the audience begins to realize that the anger between Eddie and Rodolfo is about to hit its climax. The climax opens with the boxing match. This creates an uneasy tension between the three as the two cousins are curious as to what Eddie is up too as this is just after his outburst moments before about Rodolfo's talents. This also marks the beginning of Eddie's hostility finally being turned to physical aggression "E: Sure, he's terrific! Look at him go! (Rodolfo lands a blow.) 'At's it! Now, watch out, here I come, Danish! (He feints with his left hand and lands with his right. It mildly staggers Rodolfo. Marco rises)" This aggression is obviously intentional as this would not have been done to any other beginner to the sport. Eddie had originally intended this to make Catherine no longer love Rodolfo; instead it had the opposite effect as Rodolfo immediately started to dance with Catherine. The tension is extremely obvious not just to the audience but to the characters as well, namely Marco. As a result of his hostility turned aggression, Eddie is now on the receiving end of Marco's own violent behaviour. This is shown through the use of the chair to look like a weapon over his head and also the look of triumph on Marco's face. Eddie realizes that Marco knows that if Eddie were to attack the younger brother again, Marco is stronger and will defend his sibling, "the chair raised like a weapon over EDDIE's head - and he transforms what might appear like a glare of warning into a smile of triumph, and EDDIE's grin vanishes as he absorbs his look. As this is the most climatic moment in the drama so far, the audience finds out that Marco knows what Eddie is trying to separate Rodolfo and Catherine by any means necessary. ...read more.

As they slowly move towards each other, both Eddie and Marco spread their arms to show that, in their aggressive way, they are ready for the conflict they are going to have. The dramatic tension is now at the highest point in the tragedy as the audience can see that Eddie and Marco are now ready for their final confrontation. In his anger, Eddie gets a knife into his hand and raises it at Marco giving him one last chance to redeem himself. When he refuses, Eddie lunges with the knife but Marco grabs his arm and turns the knife in on Eddie. Because of this, Eddie could be said to have died because of his actions because he was the person who was holding the knife when it stabbed him and also because his actions caused Catherine to fall in love with Rodolfo before she had a chance to meet any other men. In the end, Eddie finally gets what he wants and this is "The two women...calling his name again and again". This shows that Eddie finally receives what he has been trying to obtain throughout the whole act and that is his name and his respect from the people he loves. As he dies in Beatrice's arms, he gains back the quality of masculinity as he now has their reverence. Throughout the drama, Eddie Carbone made his inner emotions well known, which consequently served to be his undoing. As he tried to gain respect and control out of the two women he loved, Eddie actually drove them further away with his aggression and hostility and as a result, Catherine fell in love with Rodolfo. Because of this, the dramatic tension continued to rise after every violent and antagonistic conversation up until Eddie's and Marco's final confrontation. In conclusion, as the audience knows 'A View From the Bridge' to be a Greek tragedy, they can understand that the protagonist will have a fatal flaw and that in the end; this will lead to their undoing. ?? ?? ?? ?? 1 Alexander Rushton 11MH ...read more.