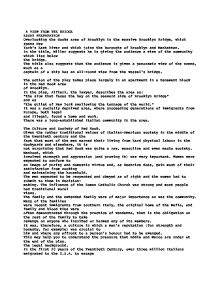 A View From the Bridge

A VIEW FROM THE BRIDGE ESSAY PREPARATION Overlooking the docks area of Brooklyn is the massive Brooklyn Bridge, which spans New York's East River and which joins the boroughs of Brooklyn and Manhattan. In the title, Miller suggests he is giving the audience a view of the community which lies below the bridge. The title also suggests that the audience is given a panoramic view of the scene, much as a captain of a ship has an all-round view from the vessel's bridge. The action of the play takes place largely in an apartment in a tenement block in the Red Hook area of Brooklyn. In the play, Alfieri, the lawyer, describes the area as: "the slum that faces the bay on the seaward side of Brooklyn Bridge" and as "the gullet of New York swallowing the tonnage of the world." It was a socially deprived area, where succeeding generations of immigrants from Europe, both legal and illegal, found a home and work. There was a long-established Italian community in the area. The Culture and Society of Red Hook. Given the rather traditional values of Italian-American society in the middle of the twentieth century and the fact that most of the men earned their living from hard physical labour in the dockyards and elsewhere, it is not surprising that Red Hook was quite a raw, masculine and even macho society. Manhood, which involved strength and aggression (and proving it) was very important. Women were expected to conform to an image of purity and domestic virtue and, as Beatrice does, gain most of their satisfaction from cooking and maintaining the household. The men expected to be respected and obeyed as of right and the women had to submit to them in decision- making. The influence of the Roman Catholic Church was strong and most people had traditional moral views. The family and the extended family were of major importance as was the community. ...read more.

He could no longer disguise his passion for her and he realises, after this scene, that, if he forces Rodolpho out of the flat, Catherine will leave with her fianc� so he will need to do something drastic if he is to prevent their marriage. In desperation Eddie goes to Alfieri, the lawyer, to ask if there is anything which can be done legally to prevent the marriage. Eddie says of Rodolpho; " the guy ain't right". Alfieri informs Eddie that there is nothing the law can do. However, the obsessed, tortured Eddie remembers there is one thing he can do if he is prepared to pay the price. The Conclusion. Realising that there is nothing the law can do to prevent the marriage of Rodolpho and Catherine, Eddie remembers Alfieri's words. The lawyer had told him that the only thing he could do to prevent the marriage would be to report to the Immigration Service that he had two illegal immigrants in his house. To do this would amount to a betrayal of his wife, his family and his community and he would be an outcast, shunned by everyone. In schools, pupils who 'grass' on others are despised, so you can imagine what Eddie would have to endure Alfieri had warned Eddie what would happen if he phoned: "You won't have a friend in the world, Eddie. Even those who understand will turn against you. Put it out if your mind." But he can't. The rest of the play shows what desperate measures a human being is prepared to take when he (or she) is in the grip of a great passion or obsession. Eddie has lost control of himself. His brain and common sense have been overwhelmed by his physical and emotional desires even to the point of self- destruction. It is frightening to watch and shows us that a passion, if strong enough, can lead us to betray our community and friends. ...read more.

made by the teachers; don't misbehave in class etc., and the rules of the pupils; don't grass on your friends. Keeping the 'laws' of the teachers may cause you to break the 'laws' of the pupils, and vice versa. The Importance of Fate There seems to be little to be done to avoid the tragedy of Eddie's death. It all seems predestined because of the situation Eddie is in and the powerful emotions he has. Miller makes us think about the extent to which human beings are able to control events. Certainly the intelligent Alfieri is incapable of preventing the tragedy . The Style of the Play. There are a few important points: The importance of conflict Note how many conversations in the play have two or more characters in conflict over an issue. This gives the play more energy. Dramatic moments Note how the conversations are broken up by scenes of dramatic action: e.g. the lifting of the chair the kissing scene the boxing scene the fight at the end of the play This means the audience's emotions fluctuate; quiet moments of conversation are broken up by sections of action which raise the emotions of the audience. Links with Greek tragedies. Note how the character, Alfieri, acts like the chorus in a Greek tragedy. He summarises events which take place off-stage and he comments on the actions of the main characters, bringing a more balanced, rational viewpoint on the actions of the impassioned characters. Language in the play. One of the most impressive things about the play is the way Miller has captured the language and manners of the Italian community. Almost any sentence from the play would illustrate this, but note how, in the following example, the real language of the longshoremen has been caught: Eddie: "I ain't startin' nothin', but I ain't gonna stand around lookin' at that (Rodolpho). For that character I didn't bring her up." You can see how, by dropping the final letter on some words and changing the correct order of the words in the second sentence, Miller has made the language realistic. ...read more.