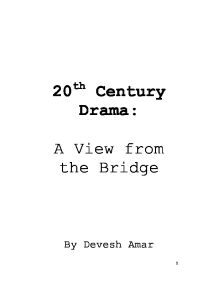 20th Century Drama: A View from the Bridge By Devesh Amar Arthur Miller was born in New York City on October 17th, 1915. His parents were both immigrants in the United States and lead a prosperous life because of the success of his father's clothing manufacturing business. But the arrival of the disastrous Wall Street crash distorted his business along with the rest of the American economy. As the result, Miller worked as a warehouseman. 'A View from the Bridge' was in a single act in its first version and was produced this way first in verse in 1955. This was then revised and was extended into a two-act play in 1956 when it was presented at the Comedy Theatre in London. In this assignment I will be discussing the role of the protagonist in 'A View from the Bridge', and I will look into his downfall and the part that he played in it. I will also be looking at the Aristotelian elements of a tragedy that Miller has used, and I will be highlighting and explaining the important dialogue and stagecraft. The play is set in a domestic area of New York called Red Hook and he describes it as 'the slum that faces the bay on the seaward side of Brooklyn Bridge'. It has its roots in the late 1940's when Miller became interested in the everyday lives and work of the dockworkers of New York's Brooklyn harbour, where he had previously worked. He described it as a 'dangerous and mysterious world at the water's edge that drama and literature had never touched' where many people worked and were poorly paid, exploited by their bosses, and importantly many were immigrants to the United States. This led to them being treated unequally and they faced racism as the whites were considered as a powerful race. Other factors that played a part in Miller writing this play was the Cold War, which occurred during the 1940's and which affected the economy and arose censorship and freedom. ...read more.

Then Alfieri asks Eddie that she couldn't possibly marry him, to which Eddie ''furiously'' replies that he wasn't talking sense. The truth though is that he can't admit his secret love for his niece and so he leaves. We then get another taste of the dramatic tension in this play, when the narrator Alfieri, gives a speech in which he says that he ''could have finished the whole story that afternoon.'' He knew what was too happen and he was yet so ''powerless to stop it.'' This is again an Aristotelian element as here a sense of inevitability is created. All he could do is pray for Eddie and hope that the unthinkable wouldn't occur. Eddie now, unable to prevent the inevitable marriage of Rodolfo and Catherine, changes his attitude towards Rodolfo. He begins to release all of his contained anger on the innocent Italian. When Rodolfo tries to take part in a conversation between Marco and Eddie, a mere comment of ''Lemons are green'' leads to Eddie over-reacting irrationally. He ''[resents his (Rodolfo) reaction]'', and Beatrice yet again ''[diverts their attention]'' from the hot-headed Eddie and acts as a neutraliser. Eddie then makes a deliberate comment to make Marco feel home sick and which intensifies the action. He tries to disguise his comment that suggested the betrayal of Marco's wife by ''[laughing]'' which is also manipulative as he makes it seem like a joke. Once again Rodolfo comments on the strictness in Italy, which agitates Eddie- ''[rises, paces up and down]''. Eddie indirectly tries to send a message to Rodolfo to lay his hands of his niece, which he does by the dialogue ''they think just because a girl don't go around with a shawl over her head that she ain't strict''. But Rodolfo expresses his respect for Eddie, who in turn explains sternly that he too is strict. Marco asks Rodolfo to be home early in the future, but Beatrice is aware of Eddie's intention and she supports Rodolfo. ...read more.

Marco strikes him in the neck and calls him a animal. Eddie goes down and when it seems Marco has full control of the situation, Eddie brings out a knife. Louis tries to stop Eddie, but Eddie is totally out of control and he lunges with his knife at Marco, who with a final cry of ''Anima-a-a-l!'' grabs his arm and presses the blade into Eddie. Mike and Louis separate the pair, but time has run out for Eddie whose words to Beatrice were his last ever. Beatrice covers Eddie while people around are praying, lights shine on Alfieri who is in the crowd. So as the play has progressed, this dominant and generous hero of the play is made to seem like a selfish and rude villain, who's immense love, narrow minded nature and feelings of insecurity have led to him falling into his own trap of death. I do indeed think that Eddie was responsible for his own death, and it was bound to happen as soon as he had made the phone call which in my view was the hubris, the point of no return. But just like Alfieri, the audience does tend to feel sorry for this hard-working man, who despite having displayed his generosity, his life had to end in this manner. His selfishness and his flaw, which was his immense love, ate him up, and he was always very stubborn to his decisions and never took advice from either Alfieri or Beatrice. His deterioration was clear and could be monitored as he first felt honoured to welcome the Italian brothers, then when they he entered he asked them when they would leave and towards the end asked them to get out of their house. When Alfieri says at the end of the play, ''And yet it is better to settle for half'', he is trying to send a message that despite the fact that Eddie displayed honest emotions through out, he still never compromised with everyone because of his narrow-minded beliefs and that eventually cost him his life. ?? ?? ?? ?? 1 ...read more.