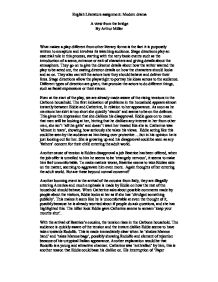 What makes a play different from other literary forms is the fact it is purposely written to encapture and involves its watching audience. Stage directions play an essential role in this process, starting with the very basic events such as the introduction of a scene, entrance or exit of characters and giving details about the atmosphere. They go on to give the director details about how the writer wanted the play to be acted out, the casting director details on how the characters should looks and so on. They also can tell the actors how they should behave and deliver their lines. Stage directions allow the playwright to portray his ideas across to the audience. Different types of direction are given, that provoke the actors to do different things, such as facial expressions or their stance. Even at the start of the play, we are already made aware of the rising tensions in the Carbone household. The first indication of problems in the household appears almost instantly between Eddie and Catherine, In relation to her appearance. As soon as he mentions her skirt is too short she quickly 'stands' and seems to be on the defence. This gives the impression that she dislikes his disapproval. Eddie goes on to moan that men will be looking at her, hinting that he dislikes any interest in her from other men, she isn't 'all the girls' and doesn't want her treated like she is. ...read more.

Little does he know he is setting himself up for trouble? He seems embarrassed, 'glancing up at Alfieri, then down to the floor' is a good example of Eddie acting wary and self conscious, about what he is going to choose to disclose. The Italian culture seems to encourage men to keep up the 'mega macho' persona, and at the time homosexuality was so heavily frowned upon in society it was a criminal offence. Eddie seems upset by this as he is very aware of the shame this could bring upon his family if his suspicions became public. Having spoken with Alfieri in the last section of the play, Eddie has become aware that he will have to adopt new tactics if he is to follow his plan to discourage Rodolfo. But a rare, relaxed atmosphere seems to reign in the Carbone household as meal time ends, it doesn't last long. Friendly banter develops into bickering and Eddies dislike for Rodolfo becomes present once again. Tension rises when Eddie says that 'ranges are green' and Rodolfo corrects him. Eddie 'resents this' and the jovial atmosphere quickly evaporates. Eddie realises that he is allowing the household to see what he is thinking, 'holding back a voice full of anger'; he attempts to retreat from the conversation by going 'to his rocker' Eddie then makes a sweeping statement about Marcos wife's fidelity, this irritates Marco and he put Eddie straight. ...read more.

This would be seen as threatening, holding it like a weapon as any moment he could choose to drop the chair. Their face to face stance shows confrontation, the spotlight on them seems to say its 'all eyes on them'. Eddie has failed; Marco has succeeded to take the alpha male status away from him. Marco 'glares' and 'smiles triumphantly Eddie seems to understand the look. The scene is dominated by a preponderance of stage directions, suggesting that what people do gives you a better idea of what they are thinking as opposed to what they say. In conclusion to Act One, there are many unresolved issues, but the main conflict is the tension between Marco and Eddie due to the recent power switch. The audience could me anticipating the outcome, possibly remembering Alfieri's suggestions. The end of Act One is dominated by physical action, resolving things through tests of strength. We left the end of the Act in a cliff-hanger, with a threatening element, showing Eddies dramatic demise. A possible reason from the scenes being dominated by actions rather than words could be due to the fact that all the characters, apart from Alfieri are not particularly well educated- putting limitations on how the characters can verbally express themselves. Perhaps this is why actions, indicated by stage directions are so important in the play. ?? ?? ?? ?? English Literature assignment: Modern drama A view from the bridge By Arthur Miller ...read more.