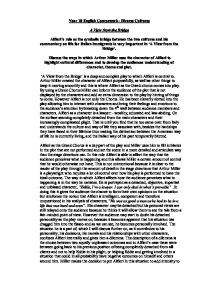 Year 10 English Coursework- Diverse Cultures A View from the Bridge Alfieri's role as the symbolic bridge between the two cultures and his commentary on life for Italian immigrants is very important in 'A View from the Bridge'. Discuss the ways in which Arthur Miller uses the character of Alfieri to highlight cultural differences and to develop the audiences understanding of character, theme and plot. 'A View from the Bridge' is a deep and complex play to which Alfieri is central to. Arthur Miller created the character of Alfieri purposefully, as well as other things to keep it moving smoothly and this is where Alfieri as the Greek chorus comes into play. By using a Greek Chorus Miller can inform the audience of the plot that is not displayed by the characters and add an extra dimension to the play by hinting of things to come. However Alfieri is not only the Chorus. He has been cleverly slotted into the play allowing him to interact with characters and bring their feelings and emotions to the audience's attention by breaking down the 4th wall between audience members and characters. Alfieri as a character is a lawyer: - wealthy, educated and law-abiding. On the surface seeming completely detached from the main characters and their increasingly complicated plight. That is until you find that he too came over from Italy and understands the culture and way of life they associate with, besides the hardships they have faced in their lifetime thus making the distinction between the American way of life he is currently living, and the Italian way of his past temporarily blurred. Alfieri as the Greek Chorus is a key part of the play and Miller uses him to fill in blanks in ...read more.

He is further, trusted by the audience because of his status and the element of trust also, which being a lawyer brings that make his words more believable as the actual truth, than that which may come from the other characters. The actual predestined situation of a Greek tragedy is something A. Miller planned to correspond with the events that he planned for the play. Miller makes the audience think about the extent to which humans are able to control events by enforcing the structure of tragedy where doom and death are predetermined and the characters in the situation have no control over the outcome, for one example, "This one's name was Eddie Carbone". Miller has used this line to show the universal sense the play is written in. This is supported in a quote from Arthur Miller where he says; "The common man is as apt a subject for tragedy in its highest sense as Kings were". The fact that it could be anyone in the role of the protagonist enforces the idea that it is destiny in control of the character's fates and that they are not the ones in control. Therefore, if this is true whatever happens death will foreshadow their every move and as it gets ever closer so does the climax; thus increasing the excitement, and in the end showing that fate is all powerful as even the competent and intelligent Alfieri is unable to prevent the tragedy that is to become of them. Arthur Miller has chosen Alfieri deliberately as an intelligent man for many reasons. Firstly the articulate language and correct grammar he has picked up whilst being educated sets him apart from the other characters, "His eyes were like tunnels". ...read more.

He brings Alfieri into the play as the view from the bridge. The view being one that he could see and wanted the American public at the time to see, also. There are subtle and subconscious similarities between Alfieri and Miller and I think he used the viewpoint of Alfieri to indirectly express his own. For example, the dilemma Miller faces in creating the play is as such: to leave the play at a point where he is not yet an established playwright and has the great possibility of incurring negative feedback from the American public for tarnishing the 'American Dream' and uncovering a problem they wanted to be left as just that, or to produce the play and try and fix a problem that is obvious to him because of his past and ignore the risk of ruining the career at the thought of helping people, who in his mind, where just as important as the people he was putting the play to. The dilemma Alfieri faces is in whether to try and help Eddie not just as a lawyer but also as a friend. On one hand he can ignore the situation he knows is happening (such as Miller could have done) and keep the reputation he has worked all his life to obtain or he can try to interrupt, talk to Eddie and persuade him from what he knows will happen at the risk of scarring his reputation but helping a friend. Of course in the end he does not succeed in the path he chooses because fate interrupts however both Alfieri and Miller chose the moral path to go down and through showing this through such a man as Alfieri, Miller is setting the example for the American people to do the same. ...read more.