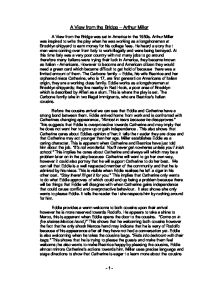 A view from the bridge. Before the cousins arrival we can see that Eddie and Catherine have a strong bond between them. Eddie arrived home from work and is confronted with Catherines changing appearance

A View from the Bridge - Arthur Miller A View from the Bridge was set in America in the 1950s. Arthur Miller was inspired to write the play when he was working as a longshoreman at Brooklyn shipyard to earn money for his college fees. He heard a story that men were coming over from Italy to work illegally and were being betrayed. At this time Italy was a very poor country with not many jobs to go around therefore many Italians were trying their luck in America, they became known as Italian - Americans. However to become and American citizen they would need a green card which became difficult to get hold of because there was a limited amount of them. The Carbone family - Eddie, his wife Beatrice and her orphaned niece Catherine, who is 17, are first generation Americans of Italian origin, they are a working class family. Eddie works as a longshoreman at Brooklyn shipyards; they live nearby in Red Hook, a poor area of Brooklyn which is described by Alfieri as a slum. This is where the play is set. The Carbone family take in two illegal immigrants, who are Beatrice's Italian cousins. Before the cousins arrival we can see that Eddie and Catherine have a strong bond between them. ...read more.

Eddie has been making snide comments about Rodolfo being too friendly with Catherine and too casual with his money. Eddie suspiciously invites Rodolfo to box after mentioning going to see a boxing match as a "treat". Meanwhile the other family members observe. "Sure he's terrific! Look at him go! (Rodolfo lands a blow.) At's it! Now, watch out, here I come, Danish! (He feints with his left hand and lands with his right, it mildly staggers Rodolfo. Marco rises.)" Eddie uses his power as head of the household to humiliate Rodolfo, comparing his strength to Rodolfo's femininity; Eddie is trying to show this to the other characters. Eddies motive for the boxing match could have been to show who was boss however Eddie could have just wanted to share an interest with Rodolfo in teaching him how to box. It could have been interpreted as a fight for Catherine in a way that Eddie wants to tell Rodolfo to back off. Marco realises Eddies manipulative behaviour and defends Rodolfo. "Marco is face to face with Eddie, a strain tension gripping his eyes and jaw, his neck stiff, the chair raised like a weapon over Eddies head and he transforms what might appear like a glare of warning into a smile of triumph, and Eddies grin vanishes as he absorbs his look." ...read more.

(Eddie, shocked, horrified his fists clenching)." This suggests Eddie is powerless to stop his demon, which is his love for his niece. This is the first time Eddie seems to realise his true feelings for Catherine and recognises his own madness as he lunges for Marco. Marco beats Eddie to the ground. "Eddie lunges with the knife" This proves that Eddie will do anything to get rid of the cousins, it also portrays that he thinks he is stronger and capable of murder. It also implies that this behaviour is a result of Eddie now being powerless to do anything else. "Marco grabs his arm, turning the blade inward and pressing it home" Eddie is stabbed with his own knife which is in his own hand. He dies ironically in Beatrice's arms. Miller used dramatic techniques to make Eddies initial dislike become an overwhelming jealousy. He used stage directions and language to make Eddies jealousy seem as though it was spiralling out of control. Miller used dramatic techniques to build up atmosphere between the characters that the reader can sense through strong stage directions. If the play was to be acted out there would be no room for direction because Miller used the stage directions to fulfil his purpose which was to create images in the readers head. - 1 - ...read more.