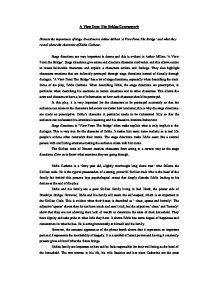 A View from The Bridge Coursework

Family was very important to Eddie at the beginning of the play and when Eddie tells Alfieri he think Rodolfo is gay he betrays his family. However from Alfieri's description of Eddies 'eyes...like tunnels' we know he is seeing everything through tunnel vision and the only thing he can see is how to prevent Catherine from marrying Rodolfo. He is again disregarding the Sicilian code and revealing family information that he wouldn't share with his two close friends Louis and Mike earlier in the book but he is now revealing them to a complete stranger. Eddies perception of everything has been skewed by his love for Catherine. When Rodolfo and Catherine are dancing and Eddie is insinuating that Rodolfo is gay, the stage directions build up the emotional tension immensely. While watching the two dance 'he has been unconsciously twisting the newspaper into a roll...he has bent the newspaper and suddenly tears it in two.' The newspaper seems to represent Eddie's anger and as the anger intensifies he rolls the paper tighter and tighter. However as soon as he rips the paper in two, he has decided to let it escape and is now 'weirdly elated' as the tearing of the paper is an outer manifestation of his inner emotional turmoil. He then continues his weird elation by teaching Rodolfo to box. However this boxing lesson has a sinister undertone, as Eddie actually wants to hurt Rodolfo. As the audience knows about Eddie's intense hate for Rodolfo but Rodolfo thinks that the boxing lessons are simply Eddie's way of bonding with him, this is an example of dramatic irony and this builds up the tension. As they spar, the tension is continually built up and when Eddie punches Rodolfo he finally releases his frustration and anger on him and also asserts his role as the dominant male. Marco seeing that his brother is being threatened, challenges Eddie to a chair-lifting contest. ...read more.

Now, however, he has accepted that he has lowered himself to the place he is. The fact that he knelt to Marco, his final act before his death shows repentance as he is in a prayer like stance and may being asking Marco for forgiveness and being a religious man he may also have been repenting his sins to God too. Eddies death at the end of the play links to the Greek idea of catharsis. Traditionally people believed watching tragedies was a cathartic cleansing experience. This applies to 'A View from The Bridge' as the force of evil is destroyed by Eddie's death. The stage directions increase the audiences understanding of Eddie as his actions and eyes show things about his character that the dialogue does not. The stage directions in the beginning of the play were few but as the play progressed and Eddie's sinister desire for Catherine grew, the stage directions became a lot more prescriptive. In the 1950's, the time the characters lived in, emotions were normally hidden and everyone, especially men, kept their business private. For Miller to make this play realistic he had to incorporate that and this meant Eddie's actions had to reveal more about him at time than his dialogue. Even when Eddie finally acts on his love for Catherine, he doesn't do it through dialogue, he simply kisses her. This simple action tells us more about Eddie's character at this point than dialogue could. 'A View From The Bridge' is similar to a modern version of a Greek tragedy. The central character is led by fate towards a destiny that could not be escaped. Eddie fits into the traditional view of a tragic hero. A strong character who is destroyed by a fatal flaw in his psychological make up. The stage directions are vital parts of the play and without them the play would be in effective and the dialogue would seem somewhat misplaced. This is especially true of Eddie Carbone. He is a man of many layers and they are unravelled primarily through the stage directions. ?? ?? ?? ?? ...read more.