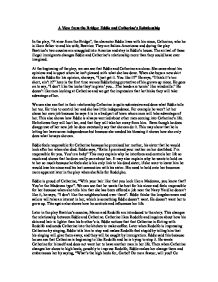 A View from the Bridge: Eddie and Catherine's Relationship

A View from the Bridge: Eddie and Catherine's Relationship In the play, "A view from the Bridge", the character Eddie lives with his niece, Catherine, who he is like a father to and his wife, Beatrice. They are Italian-Americans and during the play Beatrice's two cousins are smuggled into America and stay in Eddie's house. The arrival of these illegal immigrants changes Eddie and Catherine's relationship more than they could have ever imagined. At the beginning of the play, we can see that Eddie and Catherine are close. She cares about his opinions and is upset when he isn't pleased with what she has done. When she buys a new skirt she asks Eddie for his opinion, she says, "I just got it. You like it?" He says, "I think it's too short, ain't it?" here is the first time we see Eddie being protective of his grown up niece. He goes on to say, "I don't like the looks they're givin' you...The heads are turnin' like windmills." He doesn't like men looking at Catherine and we get the impression that he thinks they will take advantage of her. We can also see that in their relationship Catherine is quite submissive and does what Eddie tells her too. He tries to control her and she has little independence. ...read more.

Eddie becomes to act like a jealous boyfriend to Catherine. We see that Catherine and Rodolfo have been spending more time together. He waits outside the house at only 8 o'clock for Catherine who has been out with Rodolfo. Eddie expresses his dislike of Rodolfo; he says when talking about him, "He gives me the heeby-jeebies". He finds excuses for not liking him, for example he says to Catherine, "He sings on the ships didja know? ... And with that wacky hair; he's like a chorus girl or sump'm." He is trying to put Catherine off Rodolpho by implying that he is crazy or gay. And we can see that he is obsessing about their relationship, thinking about it and resenting how they are close. Catherine still likes Rodolfo and still cares for Eddie, even though he is acting in a protective, jealous way. We can see this when she comes home from the Broadway she is concerned that Eddie is upset. She says, "You mad at me?" Eddie tells her that he doesn't approve of Rodolfo. Catherine, although concerned, tries to understand why Eddie doesn't like him. She says, "What're you got against him? I don't understand." This shows how she still cares for Eddie's opinion and for how he feels. With the help of Rodolpho, Catherine begins to break away from Eddie. ...read more.

His passion for Catherine drives him to attempt murder in his madness but subsequently leads to his death. During the fight between Eddie and Marco, Eddie pulls a knife but Marco takes it and Eddie is stabbed. Eddie dies and as he does Catherine says, "Eddie, I never meant to do nothing bad to you!" This is her true feelings for Eddie and show she never meant to do any harm, and it also shows how she still loves and cares for him. And reflects her submissive role in their relationship which has been evident throughout the play. Over the course of the play we can see how Eddie is hypocritical. He says to Catherine, "Just remember, kid, you can quicker get back a million dollars that was stole than a word that you gave away." Here we can see how he hates the thought of betrayal in his community. But later in the play we can see how he changes from hating betrayal to becoming a betrayer when he calls immigration to try to deport Marco and Rodolpho. This shows he is hypocritical and can show that he only cares for himself. He says to be careful about telling people that Marco and Rodolpho will be there but then when it suits him he decides to get rid of them. This may show his madness and that he does not realise how hypocritical he is. ?? ?? ?? ?? ...read more.