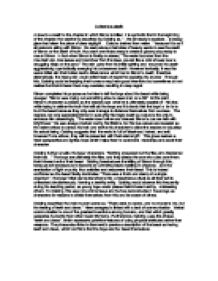 A view to a death A view to a death is the chapter in which Simon is killed. It is symbolic that in the beginning of the chapter, the weather is described by Golding as, "...the air ready to explode... a brassy glare had taken the place of clear daylight... Colours drained from water..." because it is as if all nature is siding with Simon. No real nature or beholder of beauty wants to see the death of Simon or the death of truth, thus each one hides away to create a gloomy day ready to mourn Simon. In fact when Simon is finally murdered, "The water bounded from the mountain-top, tore leaves and branches from the trees, poured like a cold shower over a struggling heap on the sand." ...read more.

He dies while trying to deliver the truth that will aid the boys and it is ironic that the boys' aim is to hunt the beast because they only ever manage to distance themselves from success. The readers can only appreciate Simon in awe after his tragic death as nature is the only to embrace him deservingly. "The water rose further and dressed Simon's coarse hair with brightness." He was always mocked during his lifetime, but his true values are revealed as the water strives to caress his hair, and revive his character to allow the readers to visualise his actual being. Golding suggests that the world is full of falsehood, hatred, and evil; however if one strives, they will be presented with their eternal gift. ...read more.

Golding would observe this frequently during his teaching period, as young boys would please their inherent evil by mistreating others. To Golding, this was not a minor issue and he has reconstructed those boys as characters for readers to shield themselves from this and be aware of others. Golding described the mob murder scene as, "There were no words, and no movements, but the tearing of teeth and claws." Here savagery is linked with a lack of communication. Verbal communication is one of the greatest inventions among humans, and that which greatly separates humanity from other lower life forms. Furthermore, Golding uses the phrase, "teeth and claws", which represents primitive features of using physical attributes rather than weapons. The phrase also links to Samneric's previous description of the beast as having teeth and claws, which confirms that the boys are the beast themselves. ...read more.

A very pleasing essay, with well used quotes and some nice references to other parts of the novel. The writer could have developed some points further and this could have afforded to be longer, developing Simon's religious/spiritual role in contrast the boys' savagery. Well done. ****