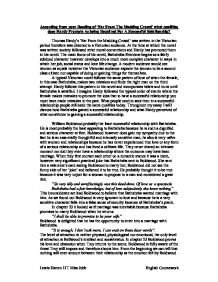 According from your Reading of 'Far From The Madding Crowd' what qualities does Hardy Promote As being Required For A Successful Relationship?

According from your Reading of 'Far From The Madding Crowd' what qualities does Hardy Promote As being Required For A Successful Relationship? Thomas Hardy's 'Far From the Madding Crowd' was written in the Victorian period therefore was directed to a Victorian audience. At the time at which the novel was written society followed strict moral conventions and Hardy has promoted them in his novel. The main focus of his novel, Bathsheba Everdene begins as a fairly subdued character however develops into a much more complex character in ways in which her job, social status and love life change. A modern audience would see women as equals however the Victorian audience expects the women to be a second class citizen not capable of doing or gaining things for themselves. A typical Victorian novel follows the same pattern of love of when the female, in this case Bathsheba, makes two mistakes and finds the right man on the third attempt. Hardy follows this pattern in his novel and incorporates twists and turns until Bathsheba is satisfied. I imagine Hardy followed the typical order of events where the female makes mistakes to promote the idea that to have a successful relationship you must have made mistakes in the past. What people used to seek then in a successful relationship people still seek the same qualities today. Throughout my essay I will discuss how Bathsheba gained a successful relationship and what Hardy perceived of what constitutes to gaining a successful relationship. ...read more.

Troy's true love was Fanny not Bathsheba. Bathsheba is attracted to Troy almost straight away even when she finds out what he is really like. However she turns a blind eye to this because she has already fallen in love with him. With this ideal Hardy is trying to promote the idea that love is blind. In the early stages of their relationship troy comes across as a very loving and caring husband who treats Bathsheba like a queen however as a reader we know this is far from the truth. The pinnacle of his 'boyish charm' is within chapter 28, in this chapter Troy exhilarates Bathsheba as he does a sword practise from now on in Troy dominates the relationship and this is where the deceit begins. "But how could you chop off a curl of my hair with a sword that has no edge?" "No edge! This sword will shave like a razor. Look here" The scene is very symbolic because Bathsheba is led to believe the sword is blunt although Troy knows it is extremely sharp. The symbolism is that troy is the sword and Bathsheba is na�ve to see that Troy is a sharp edge himself and can do a lot of harm. Bathsheba's love increases for Troy as the novel progresses until the very last point where Troy is shot and Oak and Bathsheba marry. The relationship begins to diminish as Troy begins to gamble and treat Bathsheba inadequately however she persists to take it. ...read more.

Hardy named this Chapter 'The Storm- The Two Together' implying this is the way it should be. As the storm becomes very severe and pressure is on Gabriel he always calls Bathsheba ma'am this shows he respect her. The pinnacle of the chapter is where the storm becomes extremely fierce and Oak holds tight to Bathsheba as, "Heaven opened then, indeed. The flash was almost too novel for it's inexpressibly dangerous nature top be at once realized, and they could only comprehend the magnificence of it's beauty." This shows that they both felt safe and secure although everything around them was losing there stability and this is because the ideal that love will always prevail through good and bad that Hardy has tried to emphasise through out the novel. Hardy promotes many things as what should be required for a successful relationship and the ideals that he promotes are still or even more relevant today. Oak, we are told is not the most attractive man however Bathsheba still marries him promoting the ideal beauty is skin deep. Oak is far from perfect however according to Hardy the key to perfection is imperfection. In the course of true love there are many converging courses and Hardy shows all of these by the actions of his characters. Love will always be the most desired thing by people but what's more they want to be loved. Hardy promotes the obvious qualities that should be required for a successful relationship Empathy, Happiness, Trust, Respect and most of all Love. Lewis Hamm 11T Miss Jubb English Coursework ...read more.