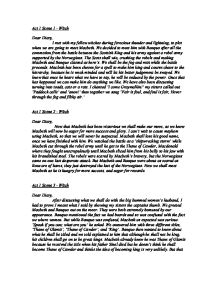 Act 1 Scene 1 - Witch Dear Diary, I met with my fellow witches during ferocious thunder and lightning, to plot when we are going to meet Macbeth

Act 1 Scene 1 - Witch Dear Diary, I met with my fellow witches during ferocious thunder and lightning, to plot when we are going to meet Macbeth. We decided to meet him with Banquo after all the commotion from the battle between the Scottish King and his army against a rebel army supported by the Norwegians. The Scots shall win, crushing the rebels and making Macbeth and Banquo classed as hero's. We shall be the fog and mist while the battle proceeds. Macbeth has been chosen for a spell to make him king and course chaos to the hierarchy, because he is weak minded and will let his better judgement be swayed. We know that once he hears what we have to say, he will be seduced by the power. Once that has happened we can make him do anything we like. We have also been discussing turning into toads, cats or a rats. I chanted 'I come Graymalkin!' ...read more.

We answered him with three different titles, 'Thane of Glamis', 'Thane of Cawdor', and 'King'. Banquo then wanted to know about what he shall be titled and we told explained to him that although he shall not be king, his children shall go on to be great kings. Macbeth already knew he was Thane of Glamis because he received the title when his father Sinel died but he doesn't think he shall become Thane of Cawdor and thinks the idea of becoming king is very unlikely. But that didn't stop him from fantasizing about it and then trying to use his general status to demand where the information came from. The spell is now complete as Macbeth's mind has been turned evil, where his greed will take him to any lengths to reach his desire. Act 1 Scene 5 - Lady Macbeth Dear Diary, I have just finished reading the letter from my dear Macbeth, and I am delighted that he was victorious during the battle. ...read more.

I can often hear him talking to himself about it, he's said to me that he doesn't believe that Duncan deserves to be murdered as he had been a good and kind King 'So clear in his great office', 'He hath honoured me of late'. I had to make him snap out of it. He was starting to sound scared, so I took a sordid approach and started asking if he was to scared to do it 'Art thou afeard' and that he's a coward 'And live a coward in thine own esteem'. I continued to intimidate him, until I explained the plan. It was to get his servants drunk, then stab Duncan while he is asleep. To make sure no one would suspect us, I would cover the servants daggers in blood. Macbeth was impressed with my plan and almost instantaneously agreed. So now we just have to wait until Duncan is asleep, then, it will be time. I want Macbeth to do the deed as quick as possible so he won't spend time thinking about it. ?? ?? ?? ?? ...read more.