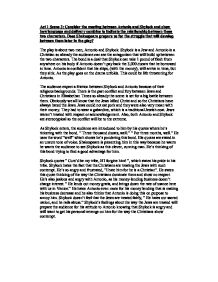 Act 1 Scene 3 the merchant of venice

Act 1 Scene 3: Consider the meeting between Antonio and Shylock and show how language and delivery combine to indicate the relationship between these two characters. Does Shakespeare prepare us for the struggle that will develop between them later in the play? The play is about two men, Antonio and Shylock. Shylock is a Jew and Antonio is a Christian so already the audience can see the antagonism that will build up between the two characters. The bond is a deal that Shylock can take 1 pound of flesh from anywhere on his body if Antonio doesn't pay back the 3,000 ducats that he borrowed in time. Antonio is confident that his ships, (with the money), will arrive in time, but they sink. As the play goes on the drama unfolds. This could be life threatening for Antonio. The audience expect a friction between Shylock and Antonio because of their religious backgrounds. There is the past conflict and fury between Jews and Christians in Elizabethan Times so already the scene is set for a big battle between them. Obviously we all know that the Jews killed Christ and so the Christians have always hated the Jews. Jews could not eat pork and they were also very mean with their money. ...read more.

The aside being Shylock reflecting on when Christians killed Christ and the damage it caused. "I will feed fat the ancient grudge I bear him." Shylock quotes "But soft, how many months do you desire?" It makes Shylock feel better treating him like a lower class person in revenge to the past. Then there is dramatic irony as Shylock says to Antonio "Rest you fair, good signor!" He says this in a very polite way but he's also two faced, as the audience know his aside. The audience now know what Shylock plans to do and there is great excitement, drama and tension that build up. This has still come to the audience like a blow in the face because they can now see what's going to happen and it keeps the audience on edge. Antonio is quite hostile and aggressively quotes, "Shylock, albeit I neither lend nor borrow by taking nor by giving of excess, yet to supply the ripe wants of my friend I'll break a custom." Their differences in the money lending trade are revealed and so the antagonism increases. Antonio's comment begins to clarify why Shylock hates him. Furthermore, Antonio reveals his true feelings about Shylock behind his back. ...read more.

The scene ends in superb fashion as the audience are kept guessing about what's going to happen next. They can sense something is going to happen right at the death therefore the dramatic suspense is huge. "I pray you wrong me not." This quote is of irony by Shylock and it states his intent to get Antonio. I think that Shakespeare was trying to highlight the conflict between the Christians and Jews. This play can have an effect on the audience relating back to the conflict. Antonio was prepared to give up his life for his friend and that is a typical Christian. Also, their hate is mainly based on the religious history and their status in society. I think that the Elizabethan audience would have favoured both Antonio and Shylock because you can look at the play in two contexts rather than one. The audience in today's world would have favoured Shylock overall because he made a deal, Antonio was happy with, and then Antonio cuts the deal, which angers Shylock with great desire to get revenge on him. In other words it can be seen that this action by Antonio started a huge rivalry that escalated and maybe if he stuck to the deal there wouldn't have been any trouble. The play concludes with the audience being in a happy tone as there is no hostile violence at the end of the play. ...read more.

Although there are some apt points made and some good analysis in places, the points are not linked to the title as concisely as they could have been. When you have a very specific title ensure that you are linking your points to each other and to the title, and the analysis relates to the language, structure or form and how they are used to shape meaning in the play.