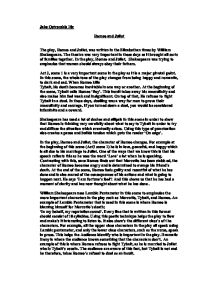 Act 3, scene 1 is a very important scene in the play as it is a major pivotal point. In this scene, the whole tone of the play changes from being happy and romantic, to dark and sad.

Act 3, scene 1 is a very important scene in the play as it is a major pivotal point. In this scene, the whole tone of the play changes from being happy and romantic, to dark and sad. When Romeo kills

Tybalt, his death becomes inevitable in one way or another. At the beginning of the scene, Tybalt calls Romeo ‘Boy’. This insult takes away his masculinity and also makes him feel weak and insignificant. On top of that, He refuses to fight Tybalt in a duel. In those days, duelling was a way for men to prove their masculinity and courage. If you turned down a duel, you would be considered infeminite and a coward.

Shakespeare has used a lot of dashes and ellipsis in this scene in order to show that Romeo is thinking very carefully about what to say to Tybalt in order to try and diffuse the situation which eventually arises. Using this type of punctuation also creates a pause and builds tension which puts the reader ‘On edge’.

In the play, Romeo and Juliet, the character of Romeo changes. For example at the beginning of this scene (Act3 scene 1) he is in love, peaceful, and happy which is all due to his marriage to Juliet. One of the ways that we know this is that his speech reflects this as he uses the word ‘Love’ a lot when he is speaking. Contrasting with this, once Romeo finds out that Mercutio has been stabbed, the character of Romeo becomes angry and is determined to avenge his friend’s death. At the end of the scene, Romeo feels guilty and resentful of what he has done and is also scared of the consequences of his actions and what is going to happen next. He says ‘I am fortune’s fool’! And this shows us that he has had a moment of clarity and has now thought about what he has done.

‘In my behalf, my reputation sound’. Every line that is written in this format should consist of 10 syllables. Using this poetic technique helps the play to flow and make’s it interesting to listen to. It also show’s the different class’s of the characters. For example, all the upper class characters in the play all speak using Lambic pentameter, and only the lower class characters, such as the nurse, speak in prose. This helps the Audience identify who is important in the play. Dramatic Irony is where the audience knows something that the characters don’t. An example of this is where Romeo refuses to fight Tybalt, as he is married to Juliet who is Tybalt’s cousin. The audience are aware of this fact, but Tybalt is not and he therefore, takes Romeo’s refusal to duel as an insult.

In the play, the two families (Montages and the Capulets) hate each other. This is why both Romeo, and Juliet, wish to keep there love for one another a secret as if it became common knowledge, it would only cause more trouble between the families. William Shakespeare uses stage directions to isolate the audience and make them feel involved. An important stage direction in this scene is when Tybalt is under Romeo’s arm. It reads: ‘Tybalt under Romeo’s arm stabs Mercutio and flies with his followers’. This is important as it puts doubt into the audience’s mind on what is going on because they cannot see anything. This device also builds tension because the reader wants to know what is going to happen next.

Shakespeare make’s this scene interesting for the audience due to the techniques he has used. For example; Dramatic irony, and Lambic Pentameter. Shakespeare makes these work well as He uses them in a way that catches the reader ‘off guard’ and this builds a lot of tension in the audience’s mind, making them want to read on!