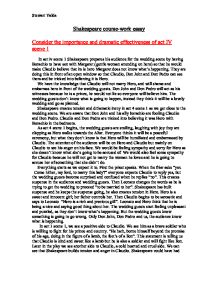 Act 3 Scene 1 - 'What do we learn about Hero's character in this scene and why does Shakespeare present Beatrice in this way?'

Shakespeare course-work essay Consider the importance and dramatic effectiveness of act IV scene 1 In act iv scene 1 Shakespeare prepares his audience for the wedding scene by having Borachio to have sex with Margaret (gentle woman attending on hero) so that he would make Claudio believe that its is hero Margaret does not know what's happening. They are doing this in front of an open window so that Claudio, Don John and Don Pedro can see them and be tricked into believing it is Hero. We have the knowledge that Claudio will not marry Hero, and will shame and embarrass hero in front of the wedding guests. Don John and Don Pedro will act as his witnesses because he is a prince, he would not lie so everyone will believe him. The wedding guests don't know what is going to happen, instead they think it will be a lovely wedding and go as planned. Shakespeare creates tension and dr5amatic irony in act 4 scene 1 as we get close to the wedding scene. We are aware that Don John and his ally borachio are fooling Claudio and Don Pedro. ...read more.

Everyone is surprised when Claudio replies "no" the he doesn't want to marry Hero. But Leonato make the ceremony to proceed, Claudio then makes a sarcastic statement "will you give me this maid your daughter?" The keyword here is 'maid' because it means virgin. So he uses sarcasm by calling Hero a maid, as he suggests that she is no longer a maid. Leonato and Hero think that he is expressing his love for Hero. They proceed with the ceremony, and now at this point we can see anger in Claudio's face as he could explode any minute. Then Don Pedro and Claudio both call Hero a "rotten orange". Sweet and nice from the outside but nasty, cold hearted and unfaithful on the inside. At this stage Claudio lets all his anger out on Hero and he addresses her as a 'Common stale'. He also tells Leonato that he saw Hero having sex with Borachio. This leaves Hero confused, as she doesn't know anything about it. Shakespeare uses Leonato to extend the drama. Firstly Leonato is convinced that Hero is not a maid meaning she is no longer a virgin. Don John and Don Pedro act as Claudio's witnesses as they saw what happened. ...read more.

Benedict is the more 'open' of the two as he is the first to declare his love for Beatrice. We can see in Beatrice's face that she is shocked when he declares his love. At first Beatrice denies having feelings for Benedick but then Beatrice declares her love for him. The mood changes when Beatrice asks Benedick to "kill Claudio." We can imagine Benedicks face. Claudio and Benedick have been friends for a long time. So at first he rejects to kill Claudio "ha, not for the wide world". Beatrice is shown to be cold hearted and wants Claudio to be dead for what he did to Hero. Beatrice wishes that she were a man so she could kill Claudio. "oh God that I were a man! I would eat his heart in the market place". Beatrice then tells benedick that Claudio has wronged Hero. "sweet Hero, she is wronged, she is slandered, she is undone". Benedict asks Beatrice if she is sure that Hero is wronged." think you in your soul the count Claudio hath wronged Hero."Beatricereplies with a 'yes'.yeah ,as sure as I have a thought, or soul." Benedict tells Beatrice that's enough and he is convinced, so he will challenge Claudio." enough, I am engaged, I will challenge him." As one love story dies another begins. Stewart Yalda ...read more.